Dubrovnik City Walls: All you have to know!

The City Walls of Dubrovnik are undoubtedly the most imposing attraction of the Dalmatian coastal city and its landmark at the same time. On top of that, it is one of the most beautiful and best-preserved city walls in Europe! Together with the historical old town, this gigantic wall from the Middle Ages is on the UNESCO World Heritage List, and thus a visit to this fortress should not be missed on any trip to Dubrovnik.

In this travel guide we give you all the important information about the Dubrovnik City Walls. We also show you amazing pictures, give you exclusive tips on how to save money and tell you what to expect during a Dubrovnik Wall walk.

If you are still looking for where to stay in Dubrovnik, then you will find amazing recommendations for a very special stay under “Hotels in Dubrovnik“.

You can save money with the Dubrovnik-Card, a combination ticket, which includes the not so cheap entrance to the city wall as well as many other attractions and museums.

Not only the city wall is fascinating, there are many more highlights in Dubrovnik. Find unique things to do in Dubrovnik and the best beaches in Dubrovnik here summarized at a glance. 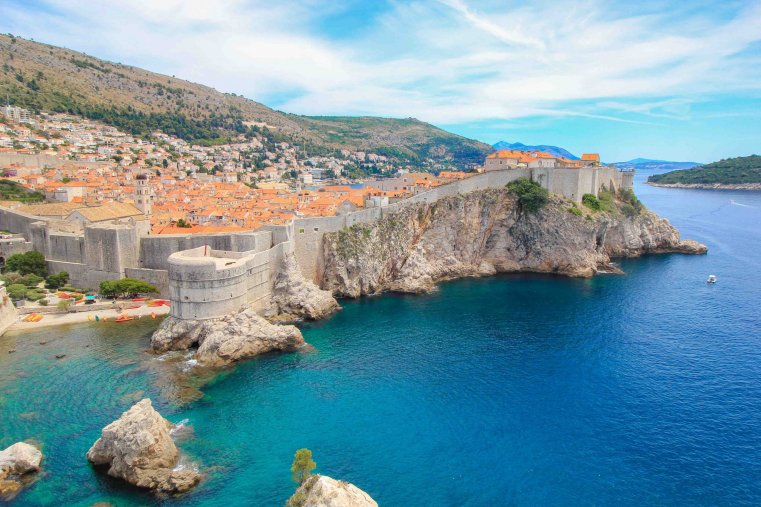 General information about the Dubrovnik Walls

The imposing city walls of Dubrovnik dates back to the 8th century. However, it owes its present appearance to further construction works that had begun in the 12th century and continued until the 17th century. The earthquake of 1667 hardly damaged this thick stone wall. Therefore, it’s the best-preserved medieval fortification in Europe, and perhaps even one of the most famous walls in the world.

Together with the historic old town of Dubrovnik, it is also on the list of UNESCO World Heritage Sites. In the past, the wall provided security and protection for the city’s inhabitants. Today, the city wall is the ultimate landmark of Dubrovnik and for most visitors it is the main attraction of any city trip.

One of the most popular activities during a trip to Dubrovnik is a walk along the approximately 2-kilometer-long wall. There are different ways to start this circular wall walk, because there are three different entrances to the city walls of Dubrovnik: the Pile Gate, the Ploče Gate and the Sveti Ivan Fort. Most of them start their tour directly at the Pile Gate, which is located right at the main entrance of the city. 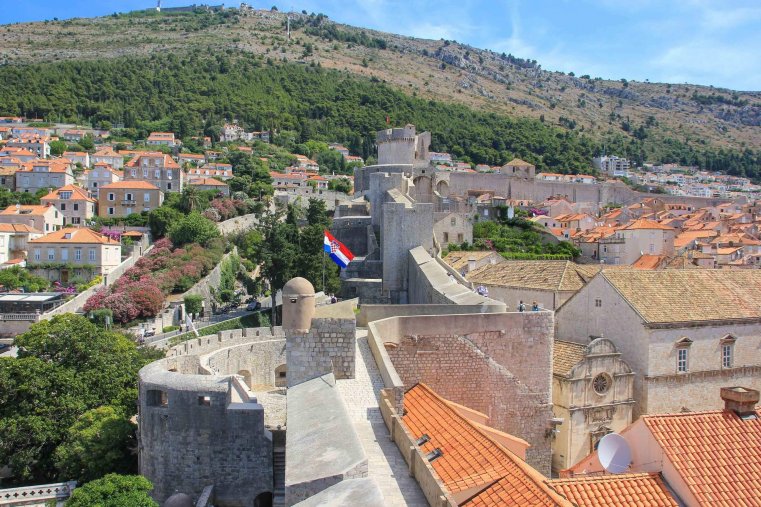 Over a rather steep step, the tour leads up to the mighty wall. At the top of the Dubrovnik Walls, there is a panoramic path that leads around the entire old town and offers unbelievable panoramic views. Right at the beginning, you will marvel at one of the most beautiful viewpoints of Dubrovnik down to Stradun, the long promenade of the city. The large Onofrio Fountain is also clearly visible from here. 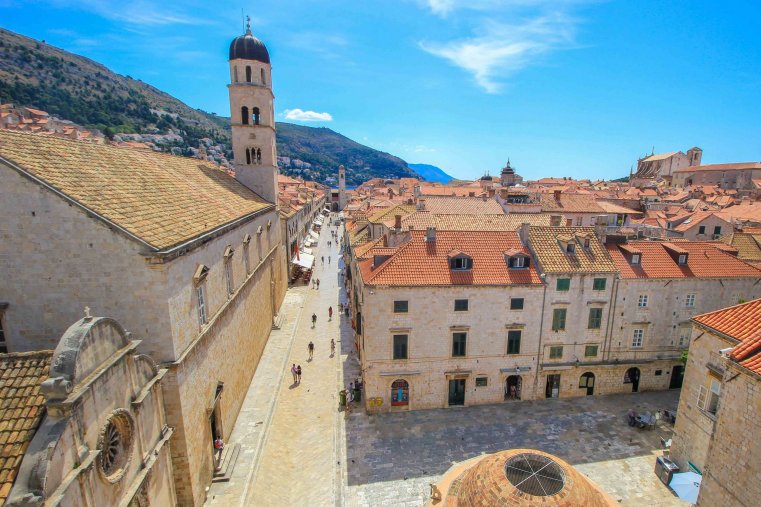 The city wall is 1.5 to 6 meters wide and at its highest points it is about 25 meters high. The whole fortification, however, is not only made up of this one wall. Numerous towers, three fortresses, bastions, several ditches, watchtowers and two drawbridges also belong to this gigantic complex. 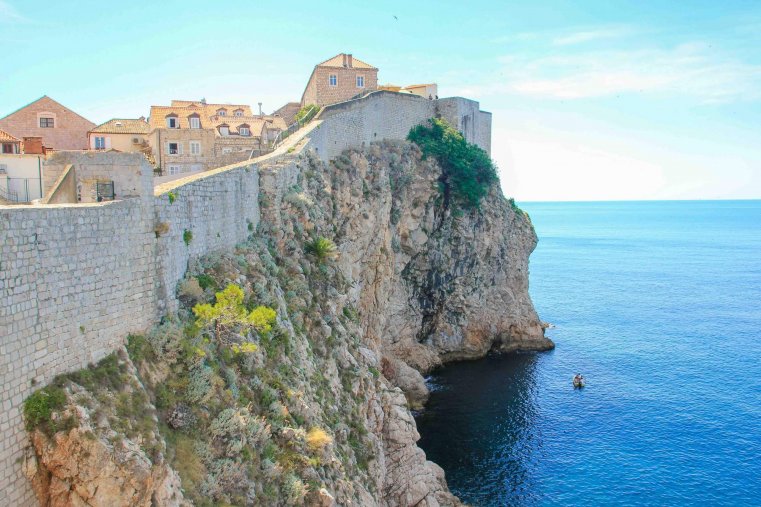 When walking along the wall, one can always enjoy a magnificent view over the coast. A real highlight is the viewpoint of the imposing fortress Lovrijenac, which is enthroned on a 37-meter-high rock above the coast. 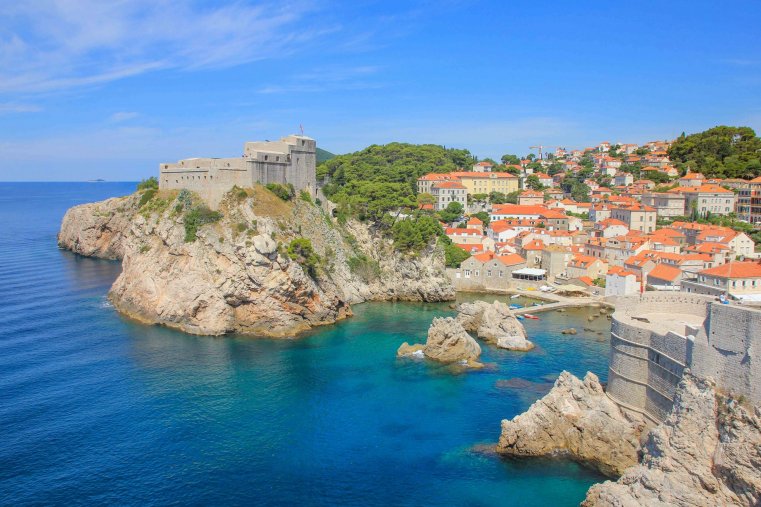 Also, fantastic are the small kiosks and café-bars, which are located directly on the wall and provide refreshments in between. With a cool drink, you can relish the stunning scenery and enjoy the breathtaking views over the deep blue sea. 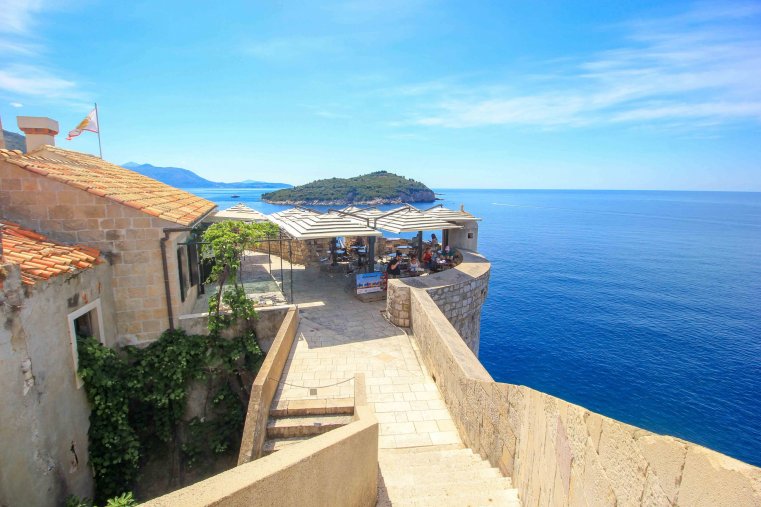 The view from the wall down to the Old Port of Dubrovnik is also uniquely beautiful. This port dates back to the 15th century and nowadays, it is the landing place for fishing boats, small yachts and excursion boats. Especially photographers appreciate this view, where you can take beautiful pictures. 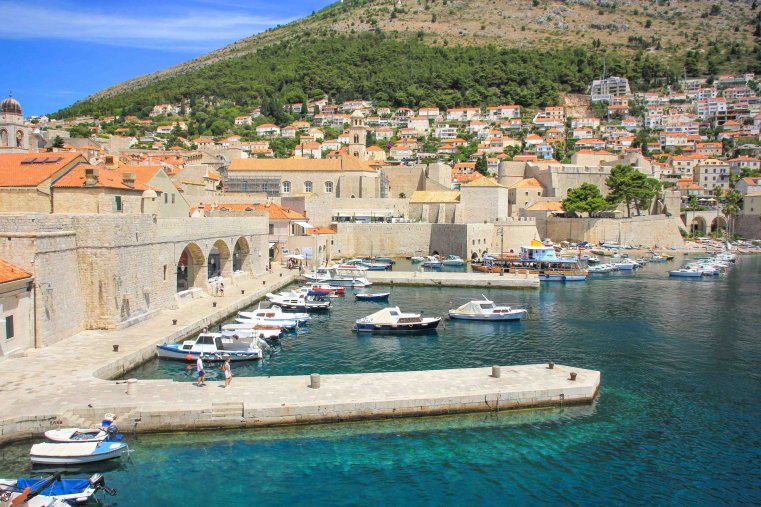 At the end of the Dubrovnik Wall walk is the Minceta Fortress. It is one of the most famous viewpoints of the wall, because from here you can experience the most spectacular view over the brown-red roofs of the city; all the way to the small island Lokrum in the distance. 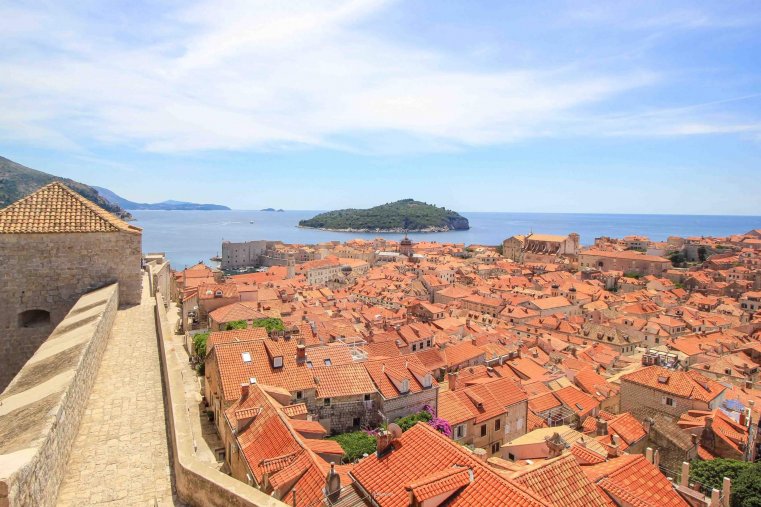 For the whole tour on the Dubrovnik Walls you should plan 1-2 hours, depending on breaks and photo stops.

Sun protection, suitable footwear and enough drinking water are definitely a big advantage. On the way, there are also 2 kiosks where you can buy refreshments.

The entrance fee to the Dubrovnik Walls is currently 200 HKR per person. That is about 27 Euros, a price that is not quite cheap for many people.

One can save money here with the Dubrovnik Card, where, in addition to the wall ticket also further attractions are included in the price. You can get them at the tourist office, right in front of the old town. From time to time discounts are offered also in the low season.

The Wall is open for visitors daily from 08:00 am to 7:30 pm. The best time to visit the Dubrovnik Wall is either early in the morning or late in the afternoon. Then it is cooler and you escape the midday heat, which should not be underestimated on the wall. Also, the light for great pictures is much better.

Guided Tours on the Wall

If you would like to learn more about the city and the history of the Dubrovnik city walls, there is also the possibility to join a guided tour. Interesting guided tours can be found, for example, on GetyourGuide, where you can also compare reviews and experiences.

Find the best accommodation in Dubrovnik: