Zadar in Croatia is the second largest city in Dalmatia and one of the most popular holiday destinations in the country. There are so many amazing things to see and to do in Zadar! The unique old town with its 3,000-year old history is particularly fascinating with its countless historical buildings and the numerous important attractions worth exploring. The Romanesque forum, the famous Sea Organ and the magnificent cathedral are just a few of the highlights in the city center. In addition, the old town of Zadar is a cultural hot spot and was even voted “The Best European Destination” in 2016. However, not only does this coastal pearl have a lot to offer in regards to culture, also the surroundings with the impressive Zadar archipelago as well as the numerous national parks and the enchanting beaches make Zadar unique in Croatia.

In this travel guide about Zadar in Croatia we show you the best things to do and all the highlights in the old town and its surroundings. You will also find tips for the best excursions and beaches in Zadar and we will tell you which accommodations are really recommendable.

Near the Old Town, in Zadar Region, there are many beautiful resorts that are especially suitable for a summer holiday. Very popular as a destination are Nin, Zaton, Petrcane, Bibinje, Sukosan and Vir Island.

If you want to combine sun, beach and sea with sightseeing, the Zadar region is the place to be. Here you will find the best excursions and day trips from Zadar that you should not miss during any visit.

Are you looking for the most beautiful bathing spots in the region? Here is a summary of the absolute best beaches in Zadar at a glance.

If you prefer to spend the night in Zadar old town, you will find some really great accommodations there. Really recommendable are the Art Hotel Kalelarga and the pension Rooms Tisa. 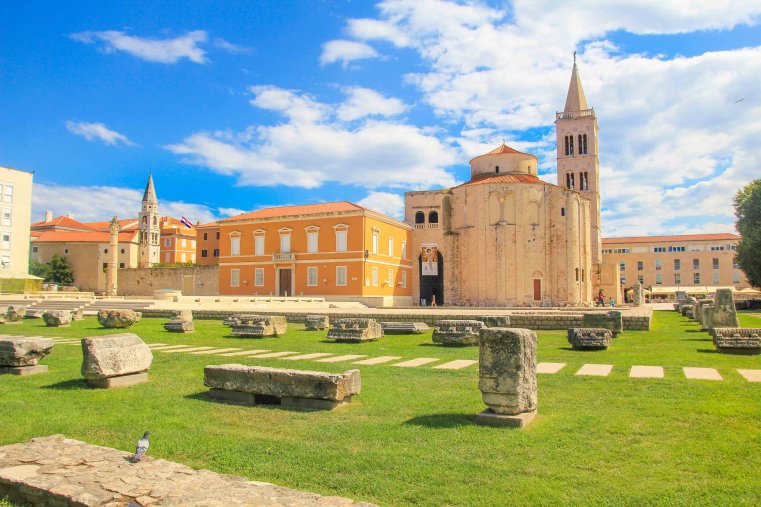 General information about Zadar in Croatia

The city of Zadar, with a population of around 75,000, is located in the Zadar Region in northern Dalmatia. Together with Dubrovnik, Split and Rovinj, this city is one of the most fascinating coastal towns in Croatia and an absolute highlight of any trip. The history of Zadar goes back 3,000 years and even today you can marvel at countless historical sites and attractions from various eras in the famous old town. Two of the most important attractions and landmarks of the city are the “Greeting to the Sun” square and the Zadar Sea Organ, which attract countless visitors from all over the world every year. On top of that, cozy cafés, fabulous restaurants and a vibrant nightlife provide entertainment.

However, not only impressive sights await you on a holiday in Zadar but also the beautiful beaches around the coastal city are ideal for your summer holidays! In addition, some of the most popular day trip destinations in Croatia are located in the immediate vicinity, and the offshore Zadar archipelago invites you to take boat trips to some of the most beautiful islands in the country. 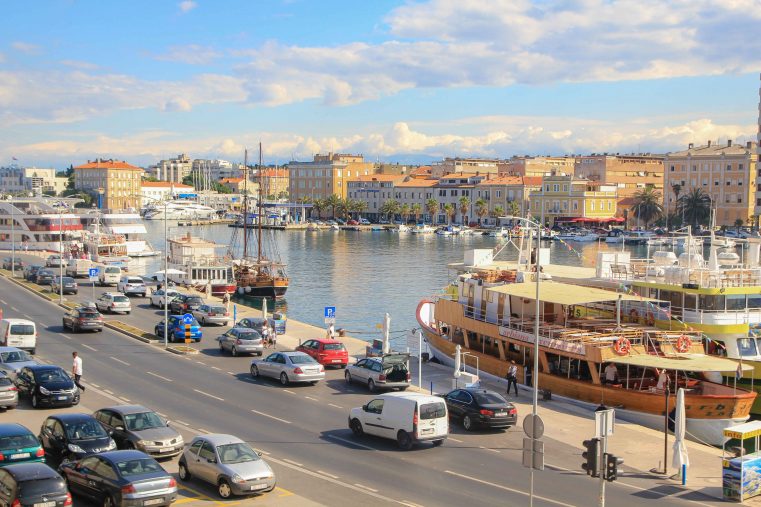 Best Things to do in Zadar

On a visit, there are many spectacular interesting sights and amazing things to do in Zadar. The old town is located on a long peninsula and can be explored easily on foot. The most important attractions are, as already mentioned, the cathedral with the forum as well as the sea organ and the famous greeting to the sun. But Zadar has much more to offer and so you will find the best things to do summarized here.

The Cathedral of Zadar, also known as the Cathedral of St. Anastasia, is the largest church in Dalmatia and certainly one of the most beautiful places to visit in the old town. This magnificent cathedral church was built between the 12th and 13th century and its façade is characterized by Tuscan Romanticism. A real highlight from the outside, this attraction is also beautiful from the inside. There is also an interesting archaeological museum to visit and the 54-metre high bell tower is truly spectacular. From its top you can experience probably the most beautiful view of Zadar. 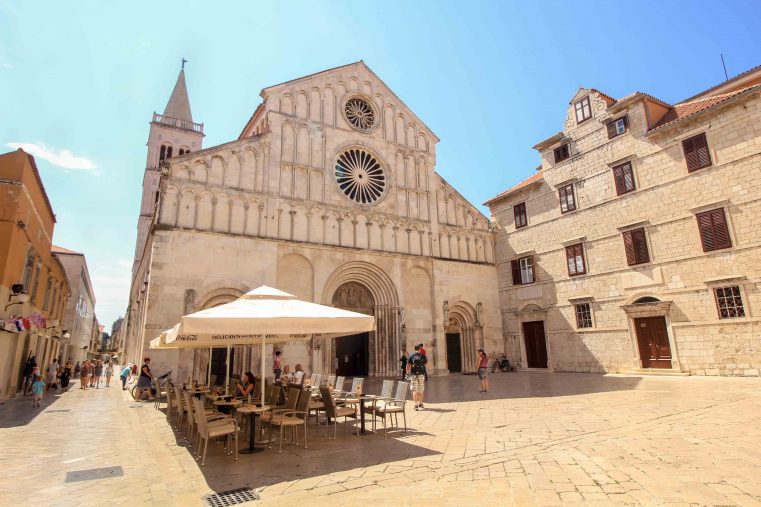 Narodni trg is located directly in the old town of Zadar and has been the center of public life since the Renaissance. Tourists as well as locals meet here to enjoy the wonderful ambience with a coffee or a glass of wine. Several interesting attractions can be found in this square. The city guard with its pink bell tower dating back to 1562 is particularly impressive and just opposite is the municipal loggia built in 1565. Another attraction is the Romanesque Ghirardini Palace, where a charming Gothic and Renaissance balcony impresses its visitors.

Tip: At the end of the square there’s also delicious ice cream, which should definitely be tried! 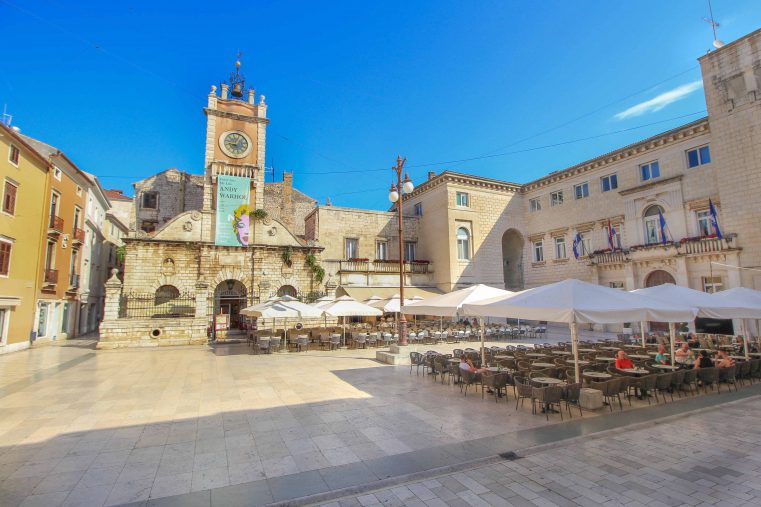 Probably one of the most important things to do in Zadar and also the historical landmark of the city is the Donatus Church (Sv. Donat) with its Roman forum. Its history dates back to the early 9th century, when the church was built on the foundations of the forum. Today it is one of the best-preserved architectural monuments on the Croatian Adriatic. Directly in front of the church, you can still admire parts of the forum, the former town marketplace from Roman times and the exhibition in the church is also worth seeing. In addition, especially in the summer months, classical concerts are held in the Donatus Church and many cultural events also take place in the Forum Square. 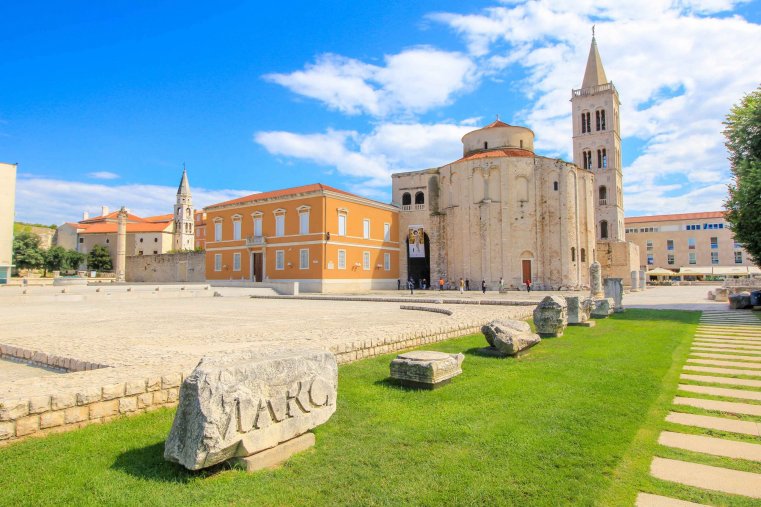 A visit to the Zadar Sea Organ is probably one of the most unique things to do in Zadar! Opened in 2005, this unique attraction by Nikola Bašić was awarded the “European Prize for Urban Public Space” the very next year. In a magnificent setting, you can listen to the natural orchestra on the white steps along the coast. Uniquely, the beat of the waves produces the sounds of this experimental musical instrument. A great place to relax and swim during the day and enjoy the magnificent sunsets in the evening. 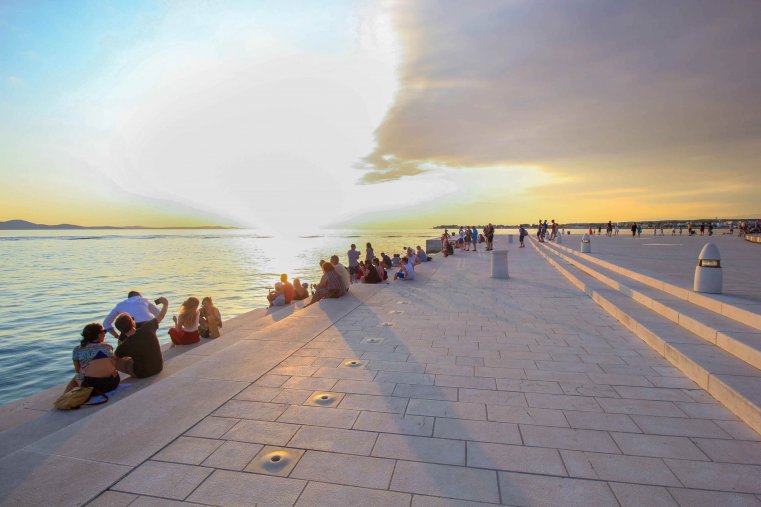 The Greetings to the Sun

At the very end of the Riva promenade, right next to the sea organ, is a very special attraction: The Greetings to the Sun. This unique sight was also created by the world-famous architect Nikola Bašić. It is a light construction about 22 meters in diameter that was integrated in a circle into the floor of the promenade. During the day, sunlight is converted into energy and after sunset an impressive play of light starts, which every visitor to the promenade can admire free of charge. 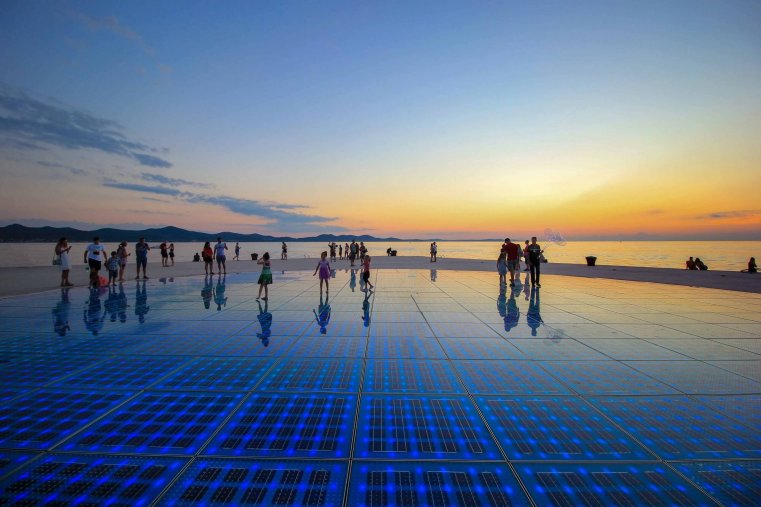 The Greeting to the Sun

On a city walk through Zadar, it is definitely worth exploring the picturesque alleyways of the old town, as there are pretty squares with Venetian architecture or an interesting sight on almost every corner. The small boutiques, souvenir shops and delicatessens, some of which are hidden in the narrow stone alleys, are also great to do some shopping. One of the most beautiful streets in the city center is the approximately 1 kilometer long Kalelarga, the so-called “wide street”, which runs right through the old town. 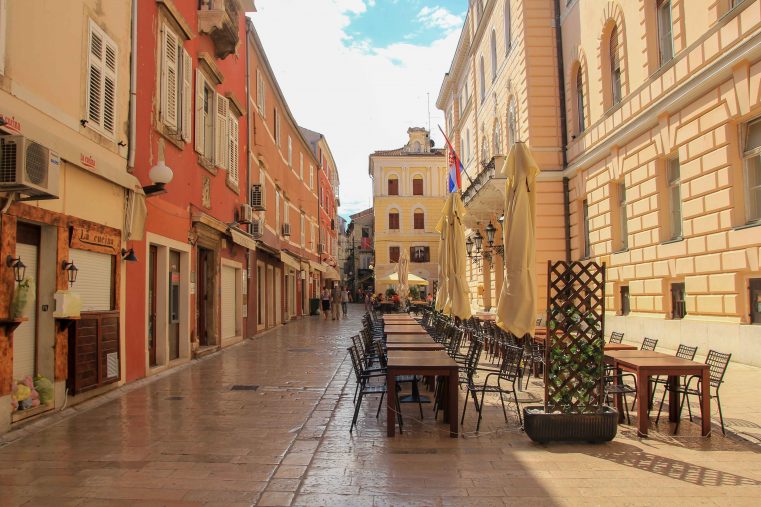 The beautiful Riva is another highlight that should not be missed on any trip to Zadar! A stroll along the picturesque waterfront promenade allows you to enjoy the city from one of its most beautiful sides, and attractions such as the Sea Organ and the Greetings to the Sun can also be seen there. Along the way, you will always find plateaus as well as a jetty that invite you to sunbathe and jump into the cool water. The magnificent view of the islands of Ugljan and Pasman, which are not far from the mainland, is also fascinating here.

Tip: Especially during sunset the Riva fills up with tourists and locals, because from here you can marvel at the most beautiful sunsets in all of Croatia. 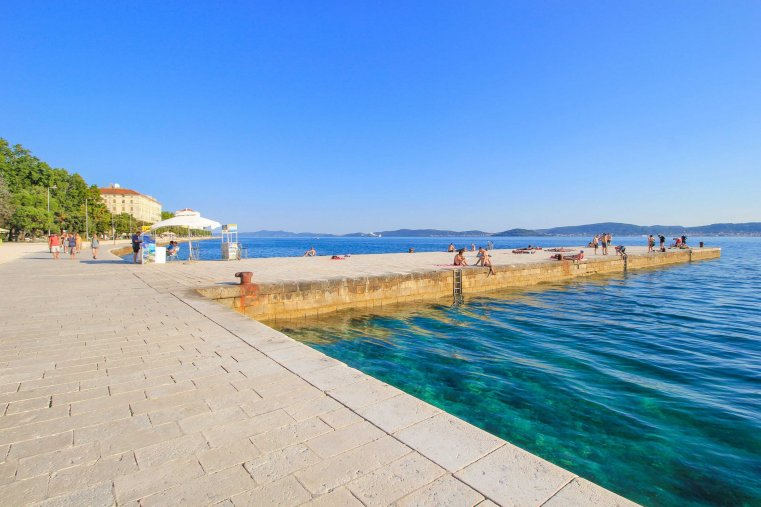 Petar Zoranić Square is one of the most beautiful squares in Zadar old town. This romantic place was named after the famous Renaissance poet and writer Petar Zoranić. Here you will enjoy a beautiful ambience with historical buildings, a Roman column and the Simuna church in the background. The interesting 5 Fountain Square is also in the immediate vicinity. This breathtakingly beautiful setting is best to soak in in one of the cozy cafés or in the authentic taverns serving regional delicacies. 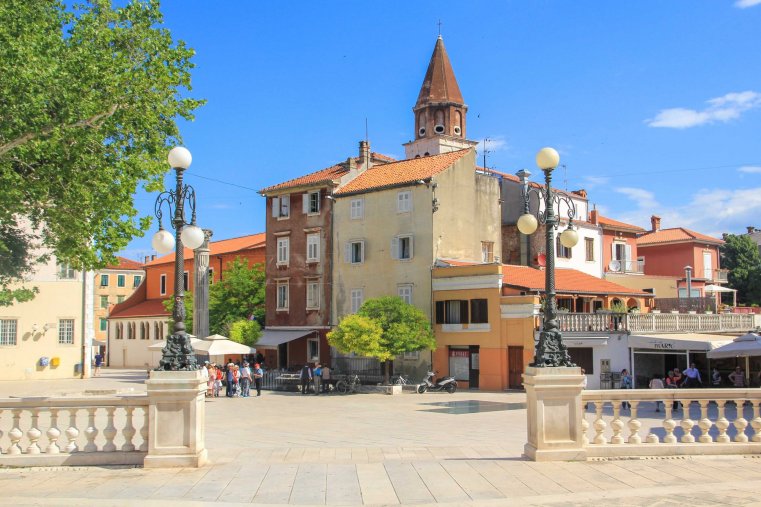 The Land Gate, also known as “Kopnena Vrata” and “Porta Terraferma”, was the main entrance to the city in Roman times and tourists still admire this beautiful Renaissance gate today. Here, one discovers the reliefs of the patron saint San Chrysogonos, the winged lion of St. Mark and the coats of arms of Zadar and the Republic of Venice can also be seen. This historical attraction was built as early as 1543 and at that time granted access to the so-called Forum. During a walk you will not only admire the many beautiful details of the city gate, but the adjacent fishing harbor Foša is also worth seeing! 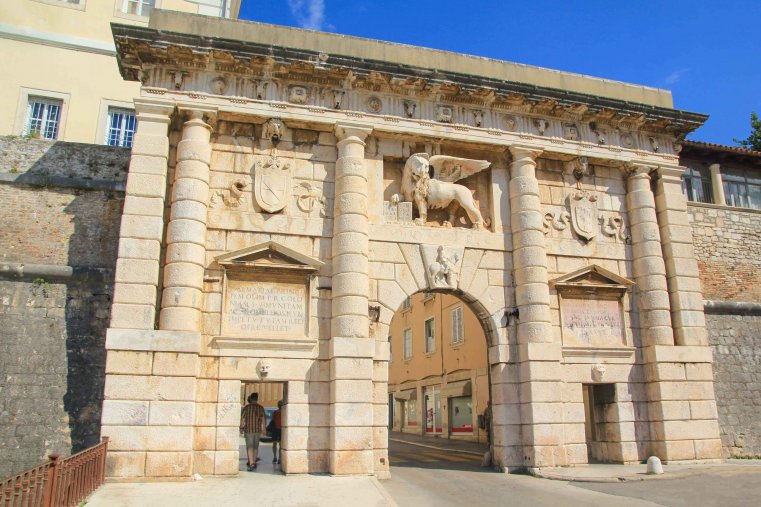 The 5 Wells Square is one of the most famous squares in Zadar. Built 500 years ago, the fountains guaranteed sufficient drinking water for the population during the siege. Via an aqueduct, water was piped from Lake Vrana to the cisterns. The Queen Jelena Madije Park, Croatia’s first public city park is also beautiful and offers a wonderful view of the city walls of Zadar.

Tip: During the summer months, really cool events take place in this part of town. 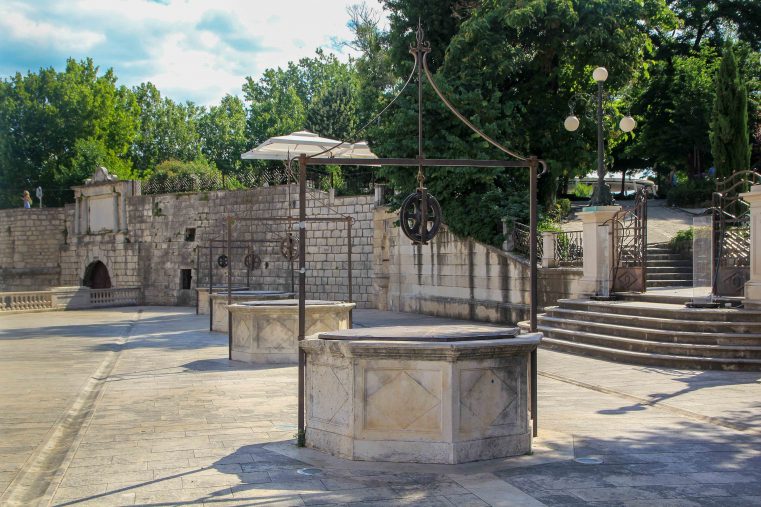 Another interesting attraction in Zadar is the Church and Monastery of St. Francis. The history of the church goes back to 1283 and thus it is considered the oldest church in Dalmatia in Gothic style. The cloister of the monastery with an interesting library, which is accessible for free to tourists, is particularly interesting and well worth seeing. Also worth visiting is the treasury right next to the sacristy, where an art collection with many exhibits and also a painted crucifix from the 12th century can be admired. 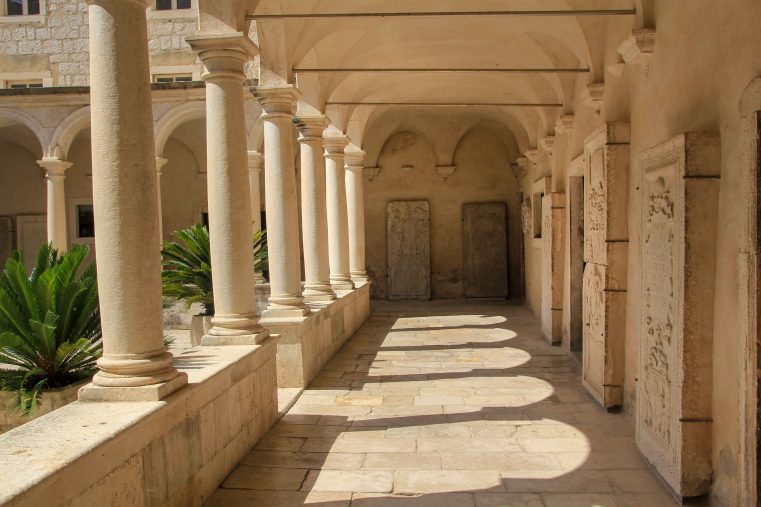 Not only Zadar is worth seeing, there are also numerous excursion destinations and attractions in the surrounding area. Some of the best highlights in Croatia can be reached from here in no time. Here are the absolute most beautiful things to do and the best excursions from Zadar.

The Krka National Park near Skradin are one of the most beautiful natural wonders in Dalmatia. Here you explore a breathtaking ecosystem and you can even swim right next to the rushing waterfall.

A boat trip to the Kornati Islands off the coast and/or to the Telascica Nature Park on the island of Dudi Otok is also an unforgettable experience not to be missed.

The small town of Nin, which is only 15 kilometers from Zadar, is also lovely, with an enchanting old town and countless beautiful sandy beaches! 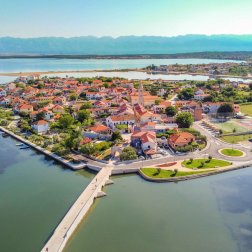 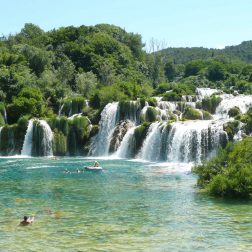 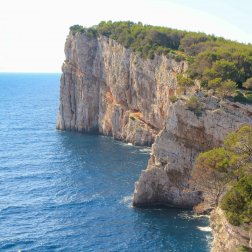 Where to stay in Zadar

In Zadar old town, but also in the surrounding area you will find a good selection of fabulous accommodations. From cheap holiday flats to bed and breakfasts, campsites with mobile homes and beautiful hotels with pools, you’ll find it all. If you are looking for a particularly recommendable accommodation in Zadar, we can give you these tips…It’s worth a look!

Find the best places to stay in Zadar