Trogir, the historic harbor town in Croatia, is located only about 30 kilometers from the coastal metropolis of Split and is famous for its picturesque old town with its many beautiful attractions. Due to its good location near the airport, the UNESCO World Heritage city has become a popular destination not only for excursions but also for a holiday in Croatia. Therefore, you can expect numerous of exciting things to do in Trogir! The history of Trogir goes back to the 3rd century BC. and sightseeing in the medieval streets is a kind of time travel where there is something worth seeing at almost every corner. In addition, the city beaches of Trogir and the picturesque beaches of the offshore Ciovo Island guarantee a relaxing holiday.

In this guide you will get the most important information and tips for a visit to Trogir in Croatia. We also show you the most beautiful attractions, beautiful pictures of the old town and where it is best to stay in town.

If you are still looking for a very special accommodation directly in Trogir, we can recommend the beautiful Apartments & Rooms Tiramola in the old town.

Only 5 kilometers from the old town is the international airport Split. From there, cheap taxis or the 37 line public buses take you directly to the center.

The most popular resort near Trogir is definitely Ciovo Island, which is connected by a bridge. Other very nice resorts on the Trogir Riviera are Seget Donji and Seget Vranjica.

If you want to know exactly where are the best places to swim in Trogir, here you will find the most amazing beaches in Trogir summarized at a glance. 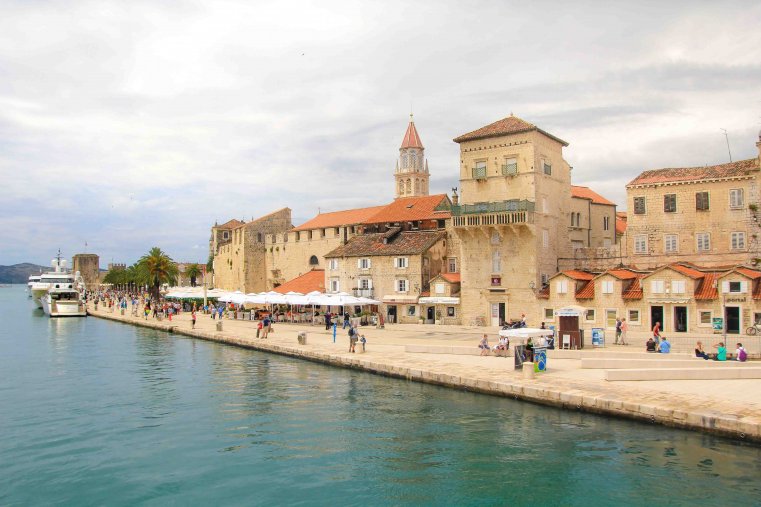 Trogir is a port city with 30,000 inhabitants and is located around 30 kilometers from Split and Primosten. The most important attraction is the historic old town, which is located on a small island and can be reached via 2 small bridges. This island was created when the Romans of that time separated the city center from the mainland by building trenches.

Above all, the city’s culture was characterized by the influence of the Greeks, the Romans and the Venetians. In the heyday from the 13th to the 16th century, the most impressive buildings and attractions of Trogir were created, and it seems that the old town has hardly changed from then until today. To preserve this, the unique old town complex was declared as a World Heritage Site in 1997.

From the large parking lot, you can reach the island of the old town via a small stone bridge. After, the historic city gates lead directly into the city center. The center is not too big and can easily be explored by foot and on your own. 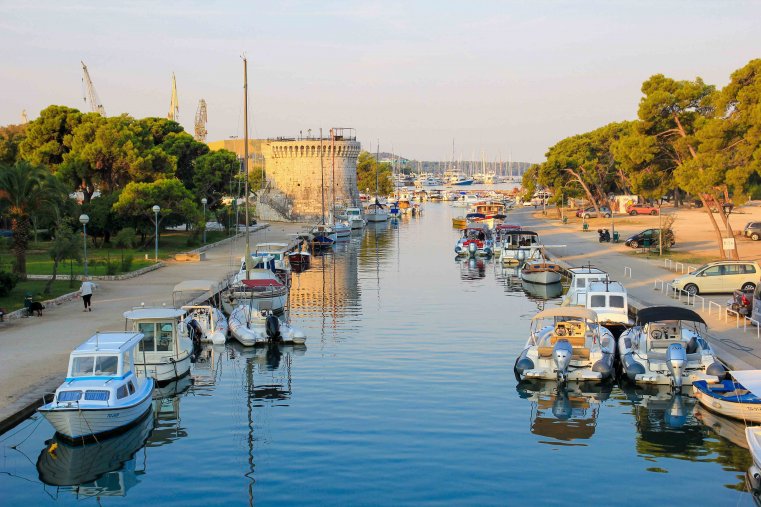 Best Things to Do in Trogir

The coastal town with its medieval old town is already a kind of open-air museum, in which a variety of wonderful highlights and attractions await you. Here, in this guide, we have summarized the best things to do Trogir at a glance.

One of the main attractions of Trogir is the Cathedral of St. Lawrence. This church was built around 370 years ago, between the 13th and 16th century, right on the spot where the temple of the goddess Hera used to be. Today it is considered the most important building in the old town and is, thus, part of any city tour.

Tip: The view of Trogir from the 47-meter-high bell tower is also impressive and shouldn’t be missed on any visit. 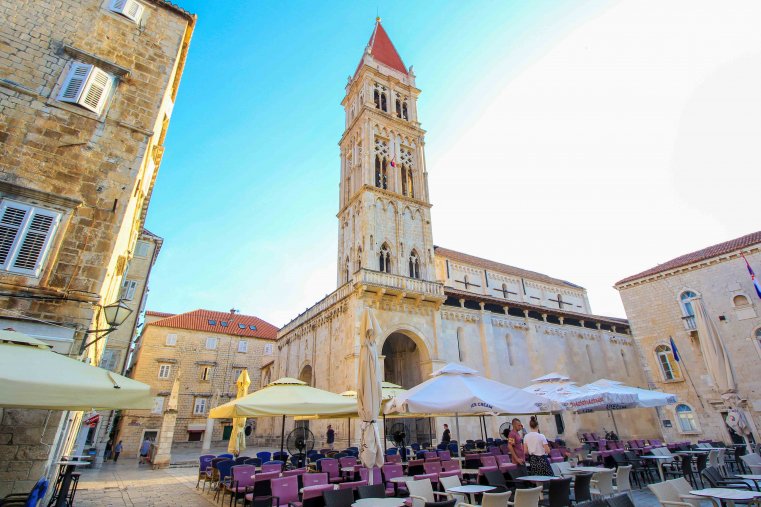 Bell tower of the church of Sv. Sebastijana & City Loggia

Another interesting attraction in Trogir is the picturesque bell tower of the church Sv. Sebastijana and the adjacent City Loggia. Both were built between the 14th and 15th centuries and are directly opposite the cathedral. The bell tower, which dates back to 1422, is the only thing of the Sv. Sebastijana that still remains.

Next to the historic church tower is the old town’s City Loggia, a facility that can be found in many old towns in Croatia. These buildings used to be a place to hold court trials and important meetings. 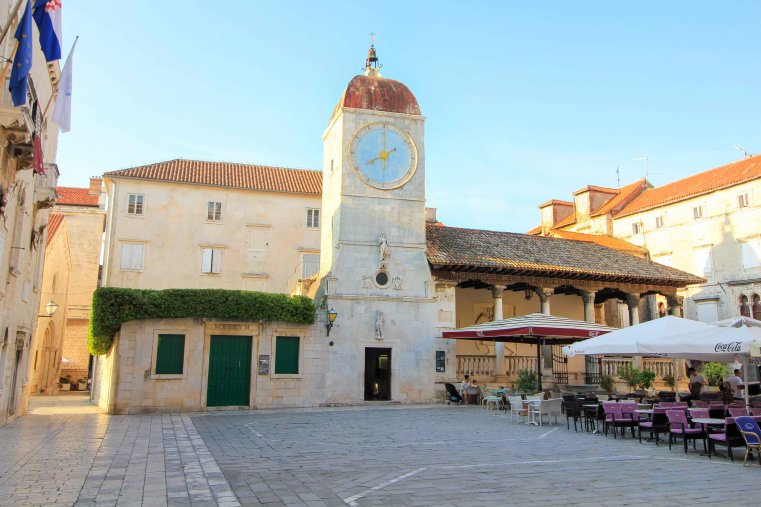 Bell tower of the church of Sv. Sebastijana 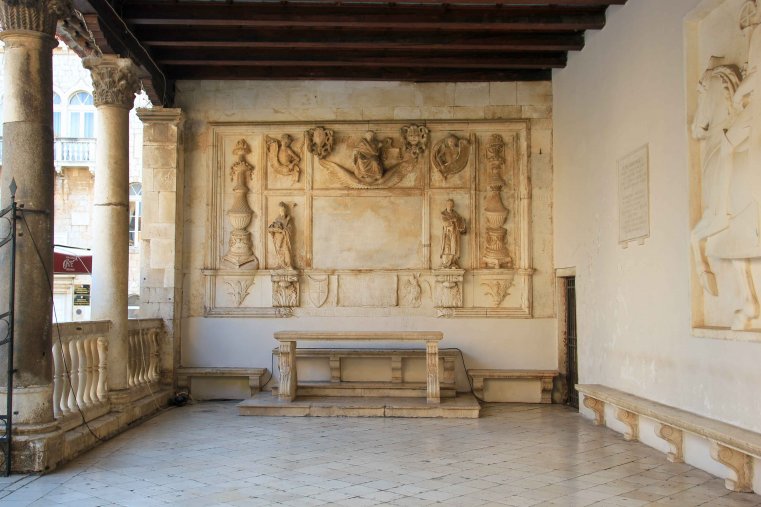 On a walk through the medieval cobblestone streets, you will discover most of the attractions and the hidden places of the city as you pass. It’s best to let yourself go and experience the old town on your own. Shops and boutiques are lined up in the narrow streets, and there are many lovely restaurants and cozy cafés on the pretty little squares.

Tip: If you need a Trogir city map, you will get them for free in one of the tourist offices. 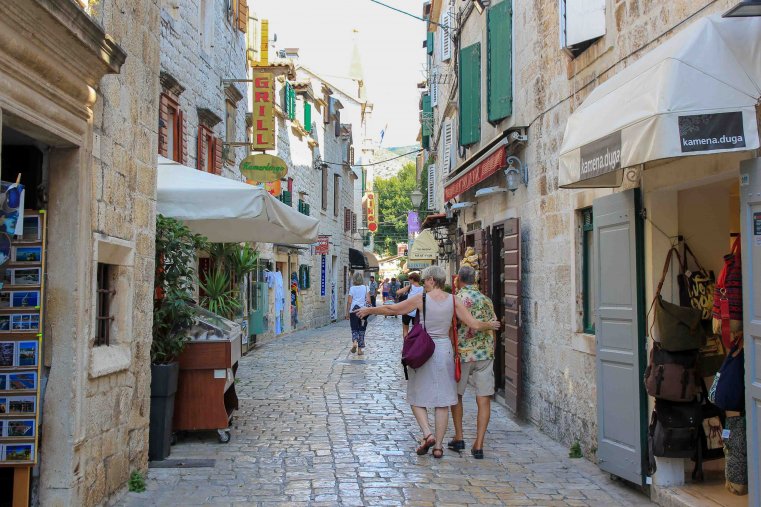 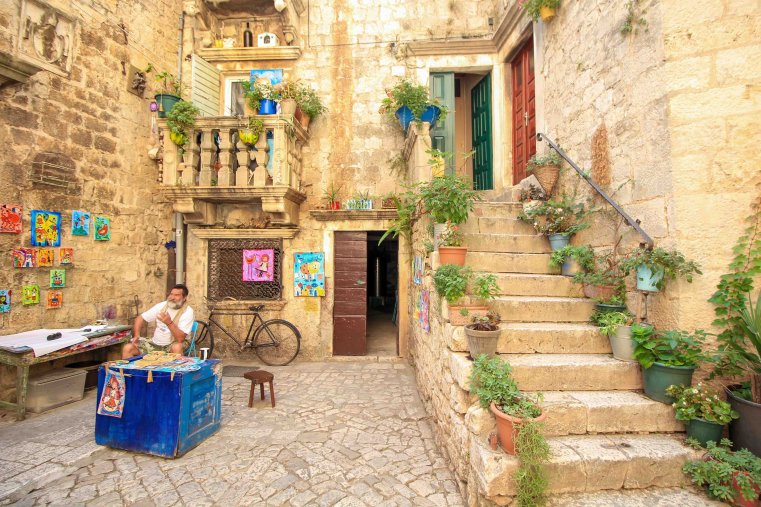 Really beautiful and another highlight of Trogir is the picturesque Cipiko Palace, a city palace in the Venetian architectural style from the 13th century. The inside of the Cipiko Palace is not open to the public, but only the facade itself is a beautiful work of art and therefore a popular photo motif in Trogir! 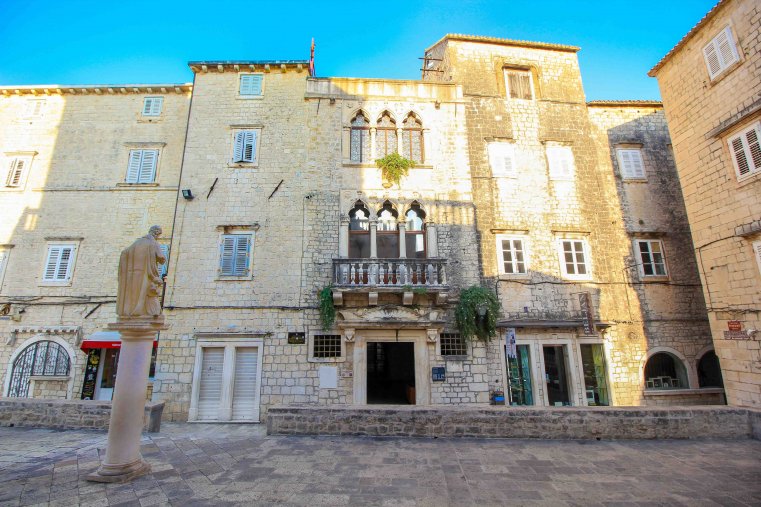 Trogir, like many port cities in Croatia, has a very lovely waterfront promenade. It is right in front of the old town and can hardly be missed on a stroll through the city. Here are restaurants and cozy cafés, where you can admire the luxury yachts that are in the harbor while having a drink. 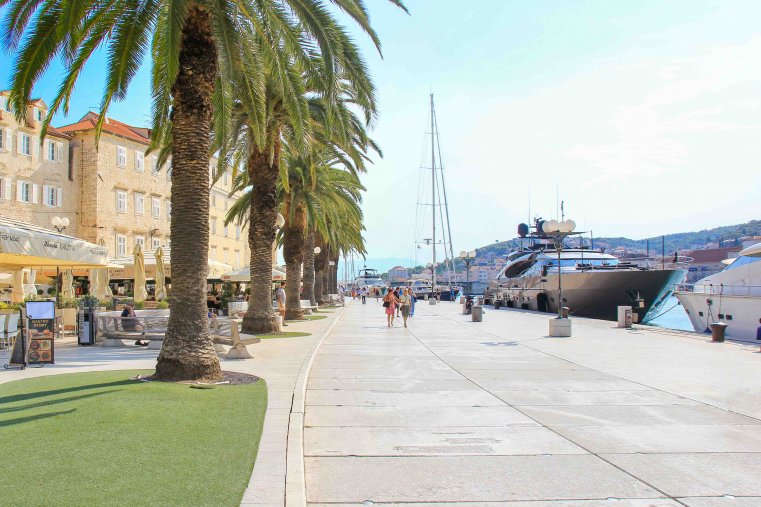 The Church of St. Dominic and the monastery with the same name are also on the list of the most important sacral sites in the city. The 14th century monastery was badly damaged during the Second World War, but later it was completely renovated and rebuilt. In the courtyard, which is accessible through a souvenir shop, there is a small exhibition of statues, jugs and stonework. 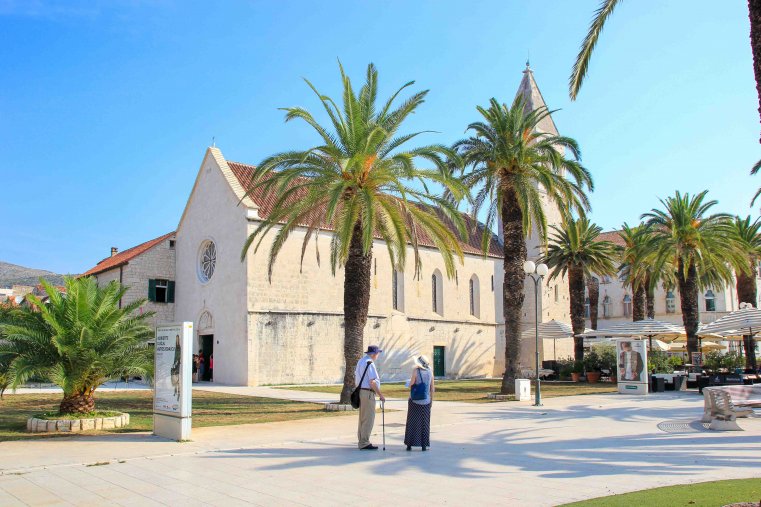 One of the most beautiful places to visit in Trogir is definitely the Kamerlengo fortress with the imposing Sveti Marko Tower. This 15th century castle is located at the end of the waterfront and can be visited during daytime. Climb up the stairs and enjoy the breathtaking view from the high wall of the waterfront and the old town of Trogir. In summer, open-air events take place here in the courtyard of the Kamerlengo Fortress. 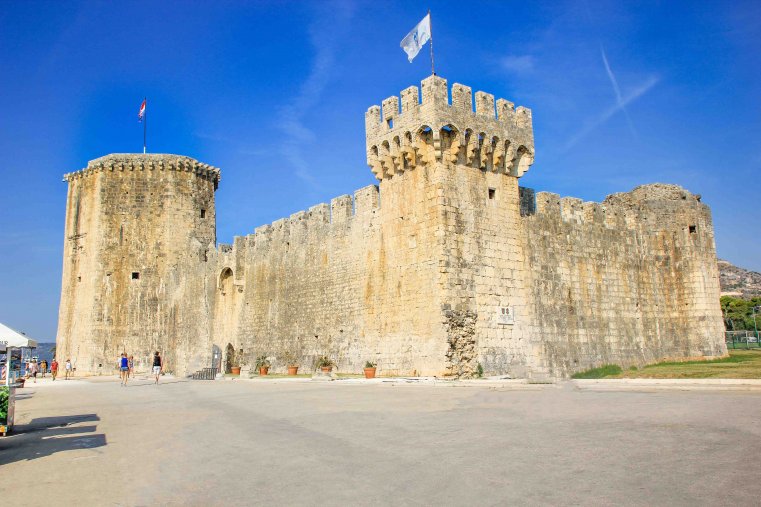 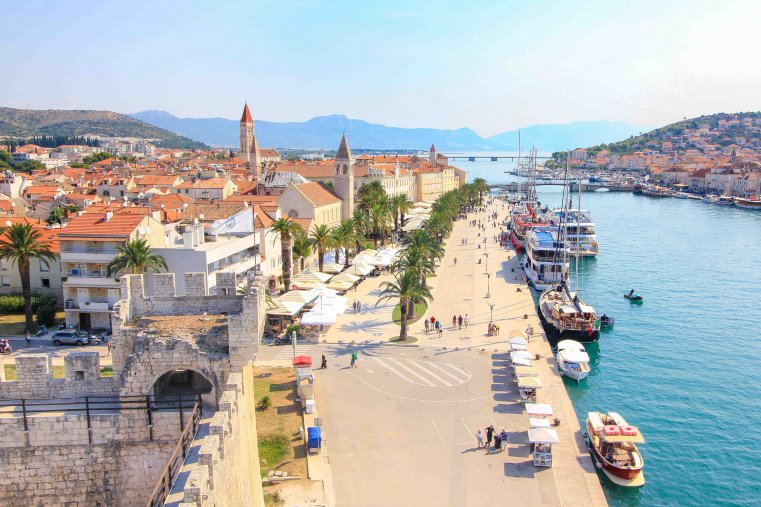 The Trogir Market is located in front of the old town, right next to the large parking lots, and is a popular spot for both locals and tourists. There is a large selection of fresh fruits and vegetables, but also specialties such as regional oils, honey, dried herbs, liqueurs and other traditional Croatian delicacies can be purchased here. 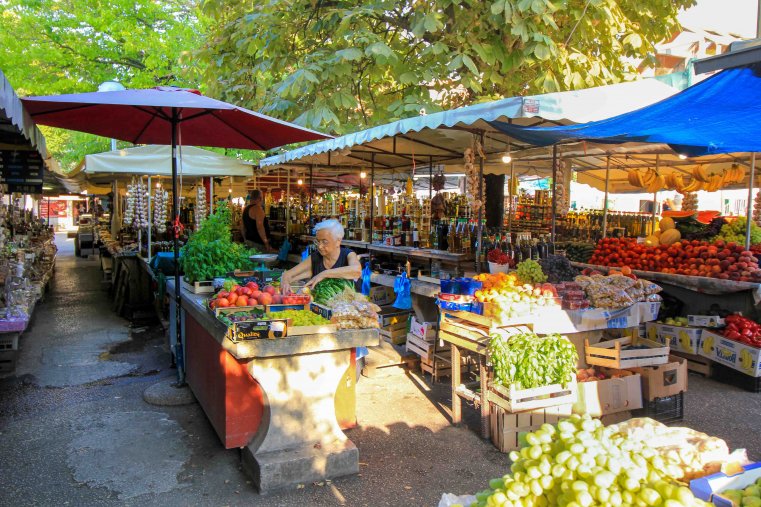 The best resorts and the most beautiful beaches in Trogir are on Ciovo Island, as well as in Seget Vranjica and the village of Seget Donji. The largest and most popular seaside resort is definitely Okrug Gornji on the island of Ciovo. Many spend their summer vacation there and then, thanks to the optimal location, explore the beautiful old town of Trogir by taxi boat, which runs regularly between the resorts and the center.

Tip: In addition, the many fantastic accommodations on Ciovo Island make a holiday just perfect! 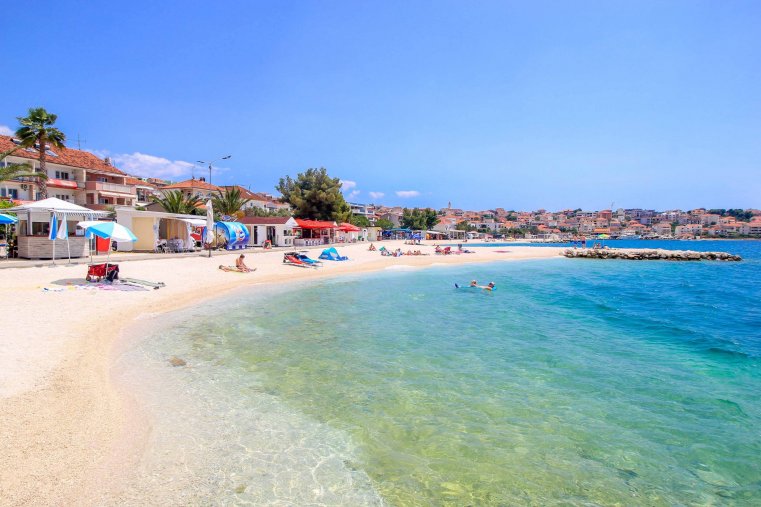 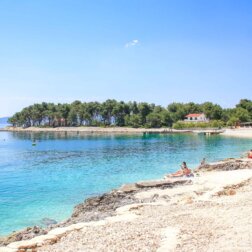 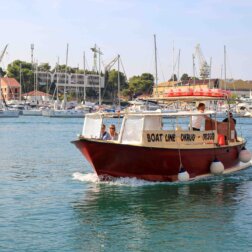 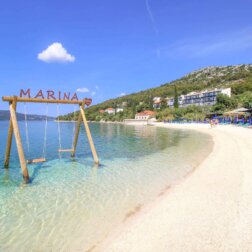 Where to stay in Trogir

Especially in the old town of Trogir there are some really fantastic accommodations. From simple backpacker hostel to posh heritage hotel, everything can be found here. Perfect if you want to experience a few days in the historic city center. If you want to have a swim, take a taxi boat and visit the most beautiful beaches around Trogir. We have summarized the best tips for the greatest places to stay in Trogir old town…It’s worth a look!

Find the best accommodation in Trogir: