The port city Rijeka in Croatia is an absolute highlight and still a real insider tip in Kvarner Bay. Situated between the famous resorts Opatija and Crikvenica, this pearl is also often visited as an excursion destination. Nevertheless, it is worth staying longer in Rijeka because numerous things to do and attractions such as an enchanting old town, the Trsat Castle, interesting museums and fantastic beaches are just waiting to be discovered! The absolute gem of the city is the Korzo, a beautiful pedestrian promenade with numerous colorful buildings built during the Habsburg monarchy. Moreover, on a city tour you will find numerous magnificent squares with ancient buildings, beautiful imposing churches and admirable castles.

In this travel guide, we will provide you with all the important information and tips about Rijeka in Croatia. In addition, we show you the most beautiful pictures, the best things to do in Rijeka and where to find really great accommodations.

Yes, Rijeka is definitely worth a visit! The beautiful harbor city is certainly not less worth seeing than Split, Dubrovnik or Pula, and fortunately still remains an insider tip in Croatia.

For a city trip, it is best to stay directly in the old town of Rijeka. Really fantastic and an insider tip is the Ivana Central Apartments just a few steps from the center and a cheap parking garage nearby.

You can have a swim in Rijeka a little north and south of the city center. Here are the most beautiful beaches in Rijeka, perfect if you want to combine sun, beach and sea with sightseeing. 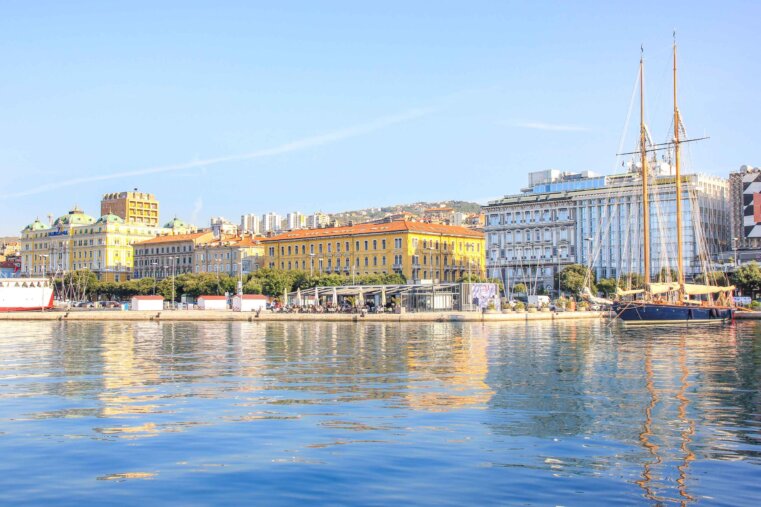 With about 130,000 inhabitants, Rijeka is the 3rd largest city in Croatia. It is located in the Kvarner Bay region, not far from the Istrian peninsula. As the European Capital of Culture 2020, this historic port city attracts visitors with numerous interesting attractions, some unique museums and plenty of cultural events. Travelers also love the really iconic mix of Habsburg heritage and industrial ruins, as well as the vibrant nightlife! Unique is also the long pedestrian zone “Korzo” with its many side alleys, which invites you to stroll around and do some shopping.

Not only the port city is worth seeing, also the surrounding area is impressive. Thanks to the airport, the bus station and the ferry port, Rijeka is an important traffic junction and, moreover, a popular starting point for round trips through Croatia. In addition, Rijeka is considered the gateway to the Croatian islands because some highlights such as Krk Island, the island Mali Losinj and Cres Island are not far from here. 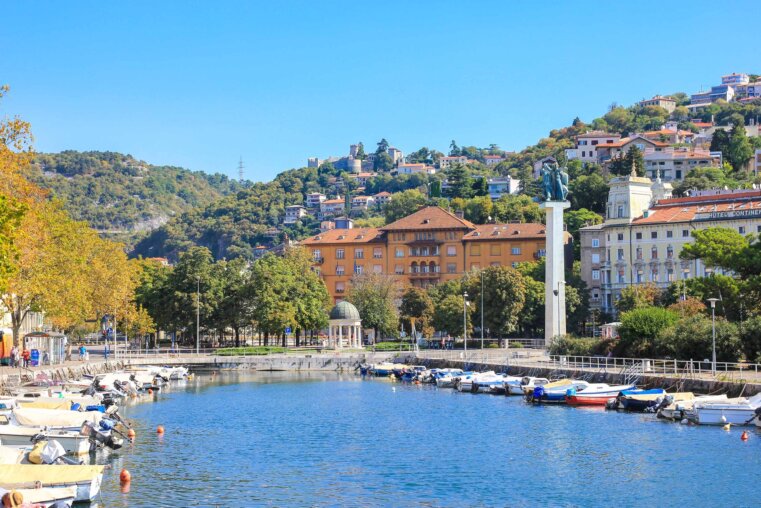 The Best Things to Do in Rijeka

During a visit to Rijeka, you can look forward to a whole range of attractions. Almost all the attractions are located directly in the old town, which you can explore by foot, thanks to its manageable size. The highlights include the historic center with the harbor, the Trsat fortress, in addition to the beaches of the port city. You should not miss anything, which is why you will find the best things to do in Rijeka summarized here:

Trsat Castle, also known as Trsat Fortress, is one of the most beautiful attractions in town, and a visit is one of the best things to do in Rijeka. This castle complex is located on a 138-meter-high hill and inspires with a fantastic view. The fortress had first been mentioned in 799, but it owes its present appearance to its last owner, Count Laval Nugent. He purchased the castle of Trsat at the beginning of the 19th century, and even today you can admire the family mausoleum during a visit. Nearby is the Basilica of Our Lady of Trsat, which is a famous pilgrimage church.

Tip: Trsat can be reached either by bus No. 2, by car or by climbing the approximately 550 steps of the “Stairway to Heaven“, the so-called Petar Druzic Stairway, which leads up from the center. 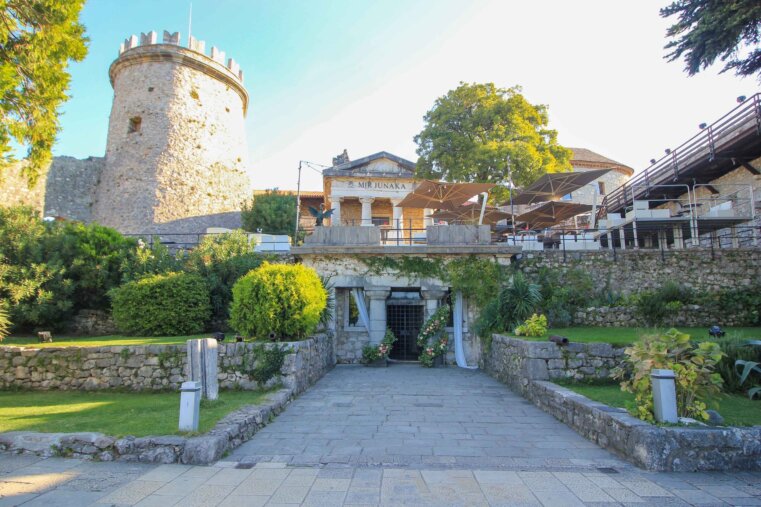 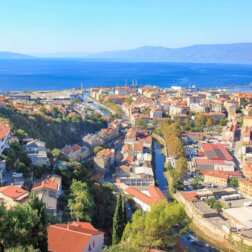 View from the Trsat Castle 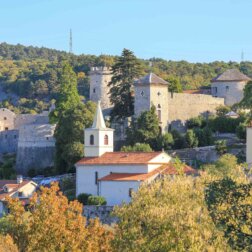 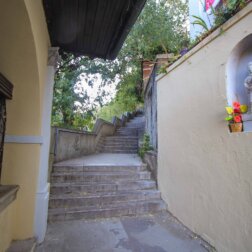 Probably one of the most important attractions in Rijeka and also the heart of the port city is the Korzo, the beautiful main promenade of the port city. This pedestrian zone leads across the old town and inspires with unique nostalgic flair. Especially beautiful are the magnificent facades, which give this promenade a unique charm. The motto here is: See and be seen! Tourists and locals meet to go shopping, but even more so to enjoy the lively hustle and bustle in one of the many cafés. 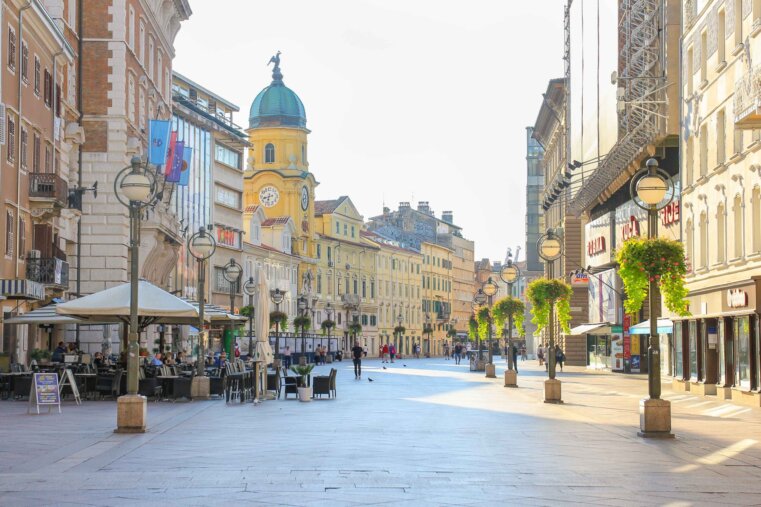 The Market Square of Rijeka is a real unique thing of the port city. It was built at the end of the 19th century and is located not far from the pier at the harbor. Today, this square with its two light green pavilions and the Fish Market is a cultural monument, which locals as well as tourists like to visit. Already in the early morning hours the lively hustle and bustle begins, where mainly fresh fruits, vegetables, freshly caught fish and local delicacies such as cheese, honey, pasta and wine are offered. 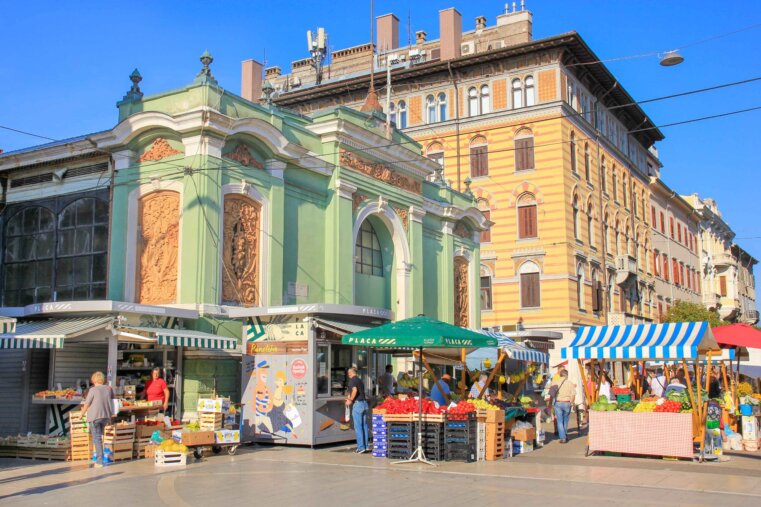 The City Tower is the landmark of Rijeka and definitely one of the most beautiful places to see in the center. This impressive building is located directly in the center of the pedestrian zone Korzo and originally, it was a typical passage tower to the old town. It was built in the Middle Ages and has been extended and renovated over the years. Today, this impressive building shines in bright yellow and is a popular photo motif on every postcard! 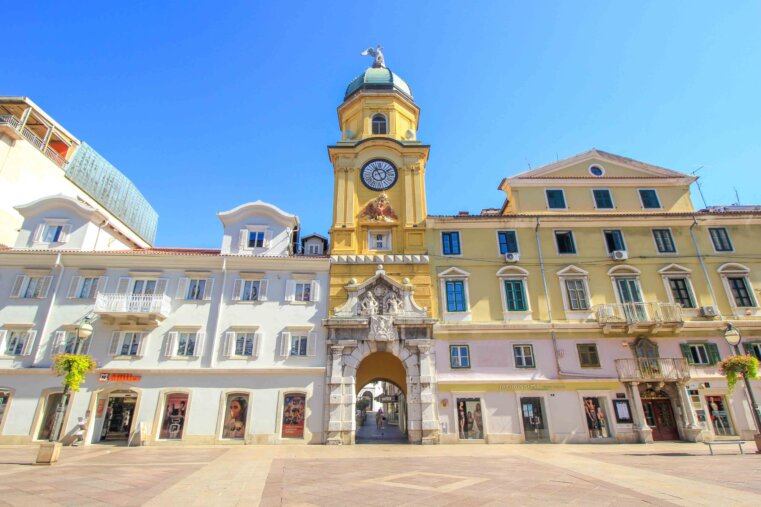 The Cathedral of St. Vitus

The Cathedral of St. Vitus, also known as Katedrala sv. Vid, is one of the most important places of worship in the city. This Baroque rotunda was built as early as 1638, based on the model of the famous Venetian church of Santa Maria della Salute. Impressive from the outside, you should also visit this sight from the inside. The baroque marble altars from the 17th and the 18th century are particularly beautiful. In addition, you can visit the wooden cross, the Lončarić stone and a bronze hand, particularly important relics, which are surrounded by numerous legends. 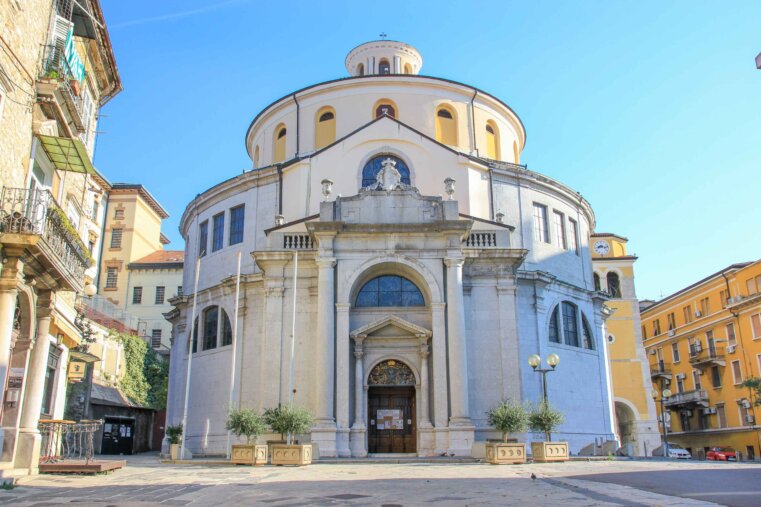 The Peek&Poke Computer Museum is one of the attractions in Rijeka that surely not everyone knows about! This private collection houses over 2,000 exhibits, mainly from the field of computing, but also of audio, video and photographic technology. Here you go on a nostalgic time travel into the world of computers. A unique feature is that you can touch the exhibited items! In addition, you can try some computer games from the 80s and 90s and thus also revive childhood memories. An experience for young and old! 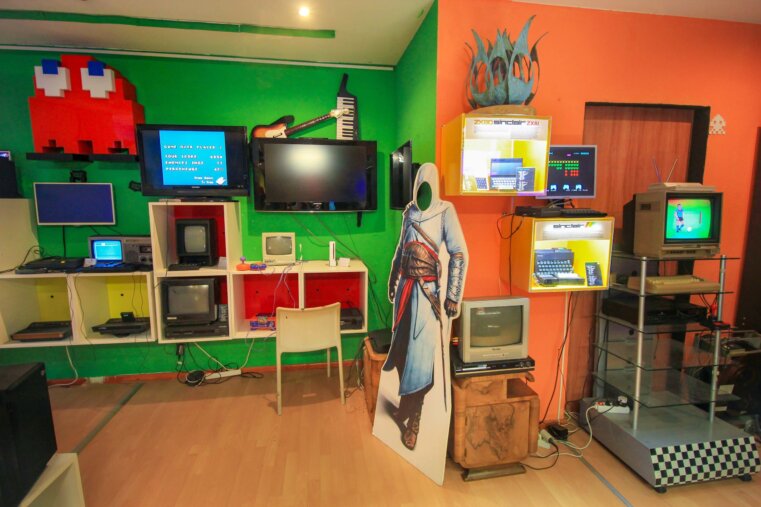 A beautiful building in Rijeka is the Croatian National Theater “Ivan pl.Zajc”, named after the Croatian conductor and composer Ivan Zajc. Together with the enchanting park, this cultural house is a real jewel in the old town. If you like, you can also visit one of the numerous performances, where different plays as well ballets and operas are performed. 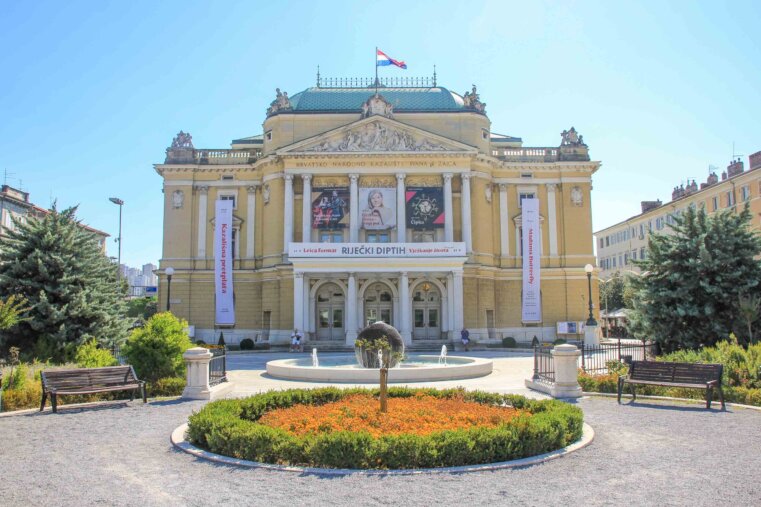 The Natural History Museum is a popular, kids-friendly museum in Rijeka dedicated to the animal and plant life in Croatia. It is located a bit outside the center, but can be reached easy on foot. The exhibition of local marine animals is especially interesting. One is amazed at the true diversity of species, including giant sharks that have their habitat in the Kvarner Bay. Especially families with children love this small but fine exhibition, which is an absolute recommendation, especially when it’s rainy weather! 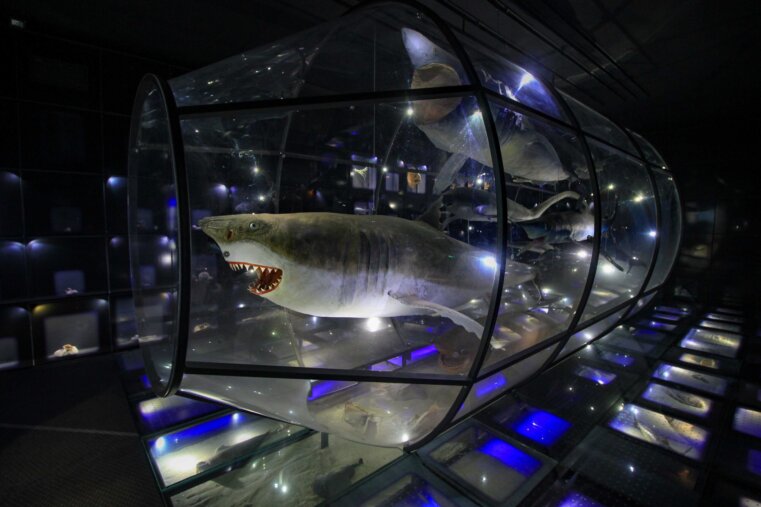 The Molo Longo is absolutely unique in Rijeka and having a walk there is one of the best things to do. This imposing 1.7 kilometer long pier had been built in 1888 as a breakwater for the harbor and was opened to the public as a promenade in 2009. During a walk, you will enjoy the probably most beautiful view of the old town of Rijeka, and you will be amazed by the many fishing boats as well as the mega yachts that dock here. Fabulous moreover are the cool bars and cafés that provide the necessary refreshments. 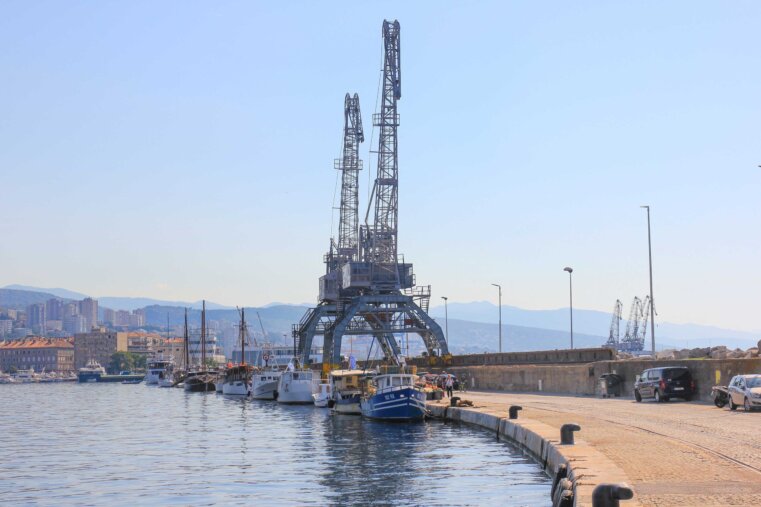 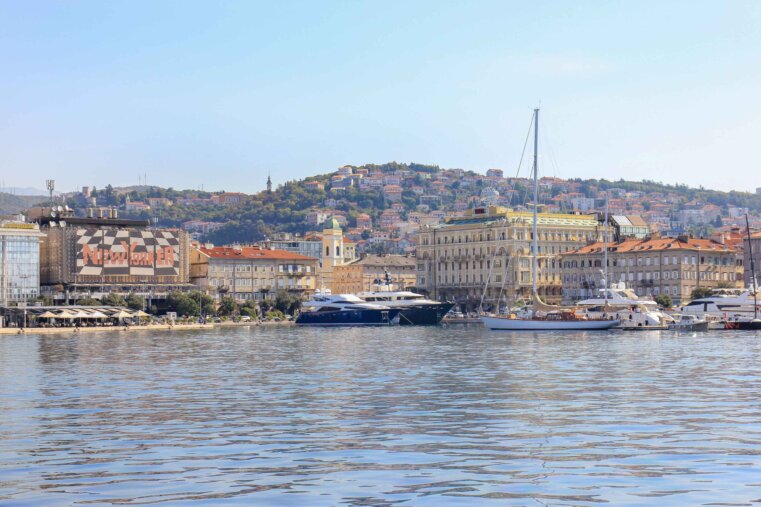 The Governor’s Palace is certainly one of the most beautiful palaces in the port city, and a visit is almost a must on every city tour. This historical attraction was built in 1892 in the neo-Renaissance style. At that time, the magnificent building was the business center of the governor of Rijeka. Today, it houses an interesting maritime museum with a great exhibition. As a bonus, the beautiful saloons of the palace can be visited. 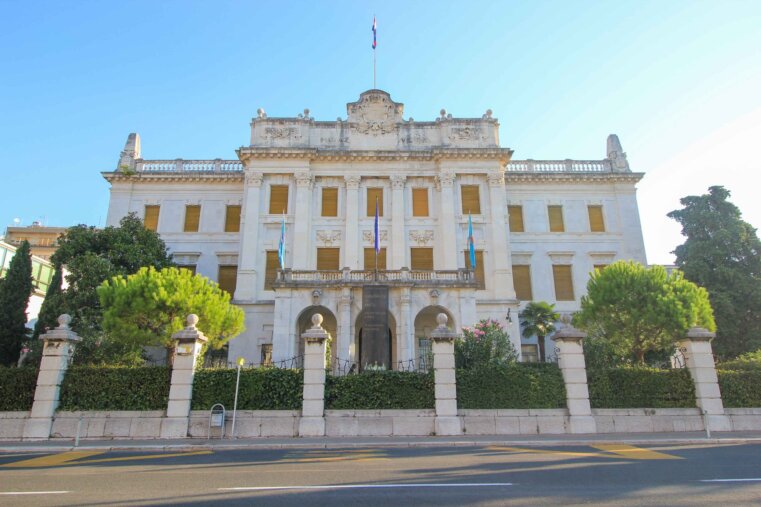 The Torpedo Museum is a real insider tip, especially if you are interested in the history of Rijeka. During the imperial period, the port city was the first place in Europe where torpedoes had been invented, tested and manufactured in large quantities since 1866. Today, the museum hall displays many of these exhibits, some of which come from the sea of Kvarner Bay. The functioning of the various torpedoes is also explained in this exhibition in a clear and easy way to understand. 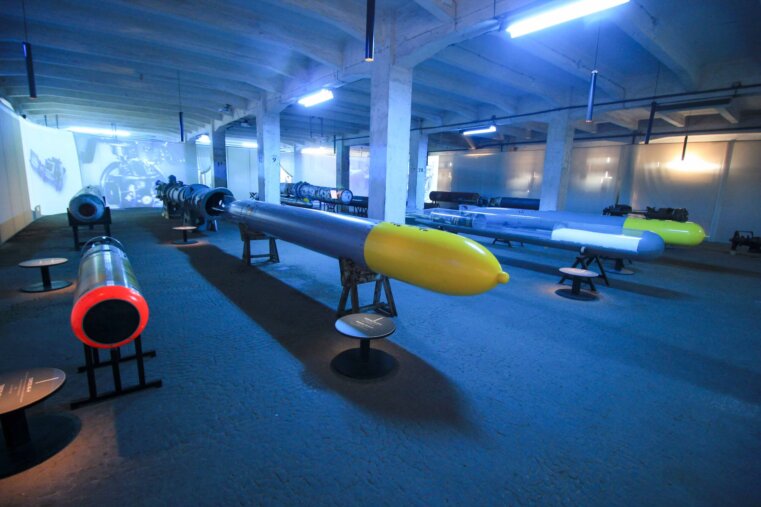 Church of Our Lady of Lourdes

The Church of Our Lady of Lourdes is located directly opposite the large bus station and was built between 1904 and 1929. The church is a two-nave, neo-Gothic basilica with a strikingly beautiful red and white façade, rich in ornamentation and resplendent in the Lombard style. In history, an addition of a bell tower was also planned, but it was never realized. The interior of the church is also worth visiting, where you can marvel at beautiful frescoes and the white statue of “Our Lady of Lourdes” at the altar. 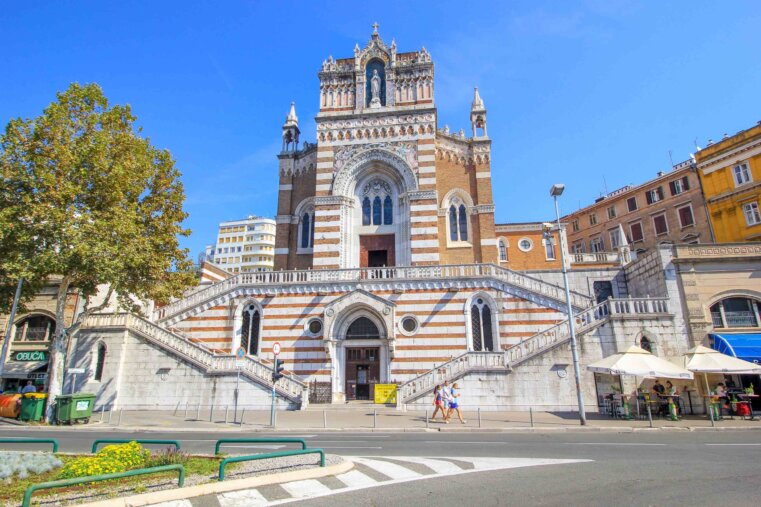 Church of Our Lady of Lourdes

Leaning Tower & Church of the Assumption

Probably one of the most extraordinary things to see is the Leaning Tower of Rijeka. This freestanding steeple belongs to the Church of the Assumption of the Blessed Virgin Mary and its origins date back to the Middle Ages. Over the years, however, the tower has tilted almost 40 cm. Archaeological excavations showed that the Church of the Assumption of Mary, together with the church tower, were built on an earlier Roman thermae, which could be the reason for the leaning. 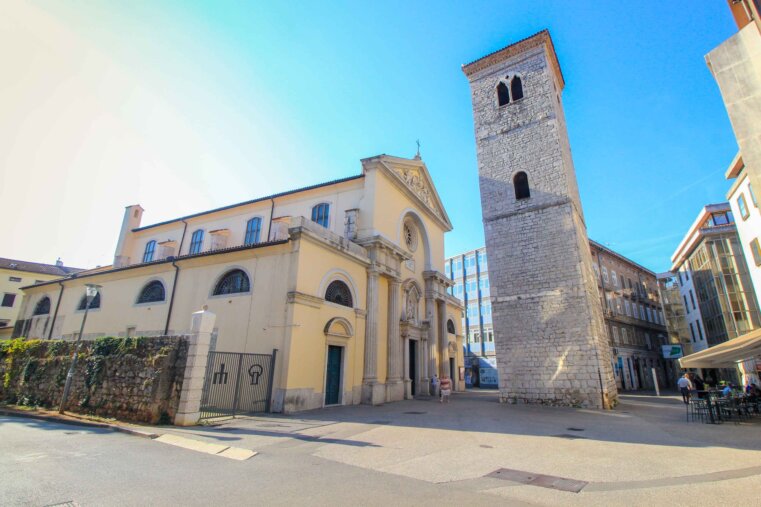 Leaning Tower & Church of the Assumption

The Rijeka Tunnel is a real unique thing to see in Rijeka! It had been built at the beginning of the 2nd World War. Formerly used for military purposes and as protection against airplane attacks, today tourists can walk through Rijeka’s underworld. The entrance to the 330-meter-long tunnel can be found near the church Sveti Vid or hidden behind the elementary school Dolac. The entrance is free of charge and, by the way, a welcome cooling in summer. 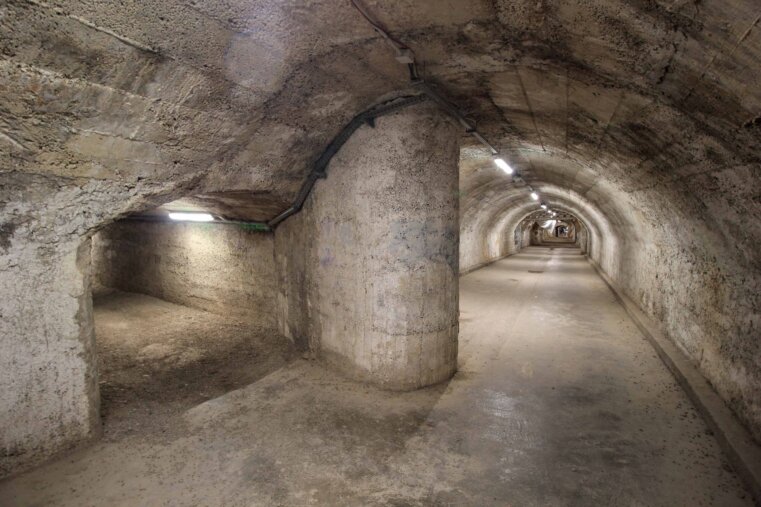 Museum of Modern and Contemporary Art

The Museum of Modern and Contemporary Art in Rijeka is considered a real highlight in the art scene and was only open in 2020, the year of the Capital of Culture. In the 2-story gallery of the former factory building, sculptures, paintings, installations, and posters by internationally renowned artists are exhibited. It’s a real insider tip for art lovers. 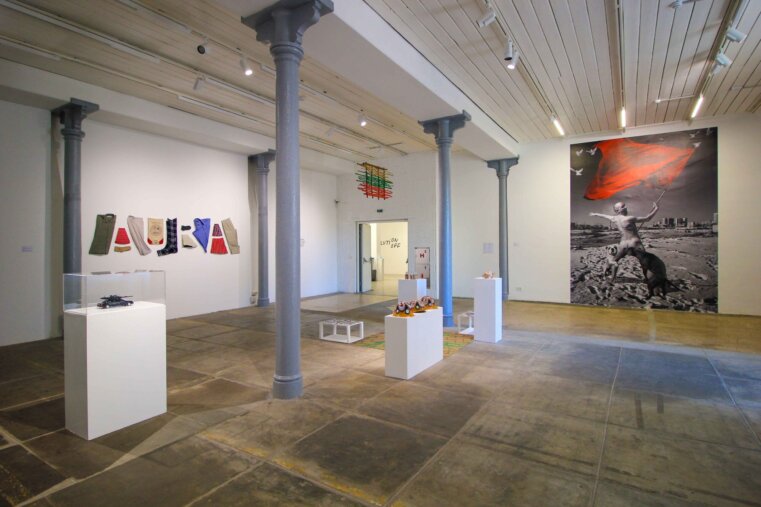 Museum of Modern and Contemporary Art

Where to Stay in Rijeka

In Rijeka, you’ll find a great range of fantastic places to stay. From budget backpacker hostels to stylish apartments, bed and breakfasts and hotels with pools, you’ll find it all. If you are looking for a recommended accommodation in Rijeka, then we can give you these tips along the way…It’s worth a look!

Find the best accommodation in Rijeka: