The enchanting city of Lucca is a real travel highlight in Italy. Situated halfway between the popular cities of Pisa and Florence, this little town is considered to be one of the most beautiful in Tuscany. A walk through the historic old town reveals many beautiful attractions, picturesque alleys and charming squares. The landmarks here are Torre Guinigi, the famous tower with the trees on top and the imposing 4 km long city wall, one of the best preserved in Europe. But also the surroundings of Lucca are really lovely and invite going on exciting excursions.

In this travel guide we give you all the important information & tips about Lucca in Italy. Furthermore, we show you the best things to do in Lucca, the most beautiful pictures and where you find the best places to stay.

Around Lucca there is a great choice of accommodations. The popular Ai Santinelli, a charming pension with a nice pool and parking lots, is really recommendable.

There are some amazing things to see around Lucca, so a few days here are definitely worthwhile. The old town of Florence, the Leaning Tower of Pisa, the Garfagnanada Valley and the snow-white Carrara Mountains are all within easy reach.

Moreover, the city is only located about 30 kilometers from the coast. Beautiful beaches near Lucca can be found, for example, in the chic seaside resort of Viareggio, where a pretty promenade also entices tourists to come.

Really fantastic city tours, as well as bike tours, cooking classes and wine tastings are offered on GetYourGuide. Perfect if you are looking for a special Tuscany experience. 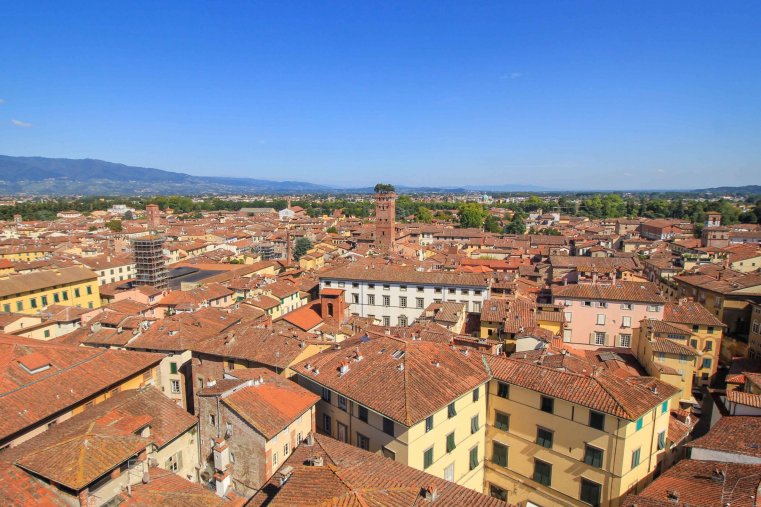 The city of Lucca with a population of around 90,000 is located in the west of Tuscany and is the capital of the province of Lucca. This city is known for its textile industry, for its excellent olive oil and for its historic old town, which is still surrounded by a well-preserved city wall. Lucca is also known as the “city of 99 churches”. And really, almost at every corner at least one small church is hidden. But the most important attraction is the tree-covered tower Torre Guinigi, which towers majestically over the roofs of the historic city.

The history of Lucca dates back to the Etruscan period, in the 8th century B.C. Later, the Romans came and founded a Roman colony in 177 B.C. From the 3rd century onwards, the first city wall was built, although remains from this period can still be seen today. Later in the 16th century, this Roman wall became a huge fortification.

Best Things to Do in Lucca

In Lucca you can expect a multitude of fantastic things to do and there are countless other attractions besides the famous city wall, the many churches and the high towers. The charming landscape in the surroundings with picturesque gardens and villas also holds surprises in store for you. Here is a summary of the best things to do in Lucca:

The Piazza dell’Anfiteatro is one of the most beautiful places to see in Lucca and its ambience is truly unique in Tuscany. This picturesque square was founded on the ruins of the ancient Roman amphitheater and, thanks to the beautiful restoration, it spreads a mix of historical charm and pure Italian feeling! Beautiful is the ensemble of oval-shaped yellow townhouses, which form a round courtyard with countless cafés and restaurants. One of the most beautiful, if not the most beautiful square in Lucca! 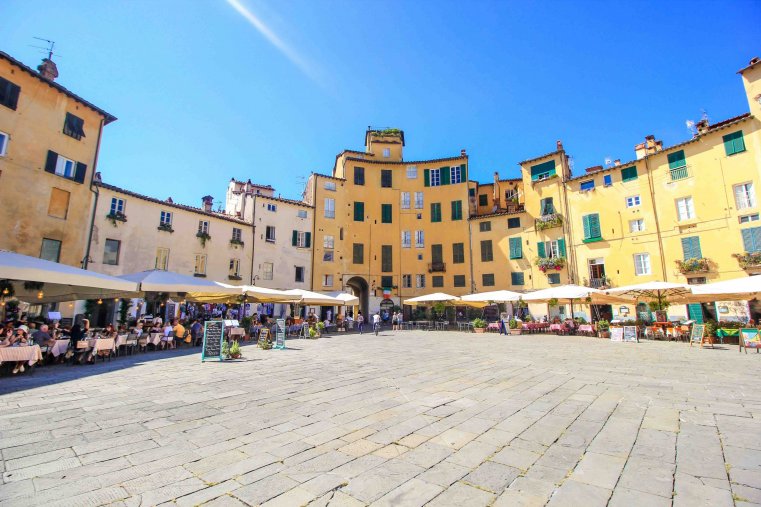 One of the most beautiful attractions in Lucca is the church of San Michele in Foro, which is located on the old Roman marketplace. This magnificent church dates back to the 12th century and was built by the famous architect Diotisalvi. Unique here is, above all, the snow-white exterior façade in Carrara marble, which is decorated with countless details, playful columns, cornices and rosettes. Inside, you can admire a rather simple Romanesque architectural style. The cross made in 1200 and the terracotta Madonna and child on the side altar are interesting to see. 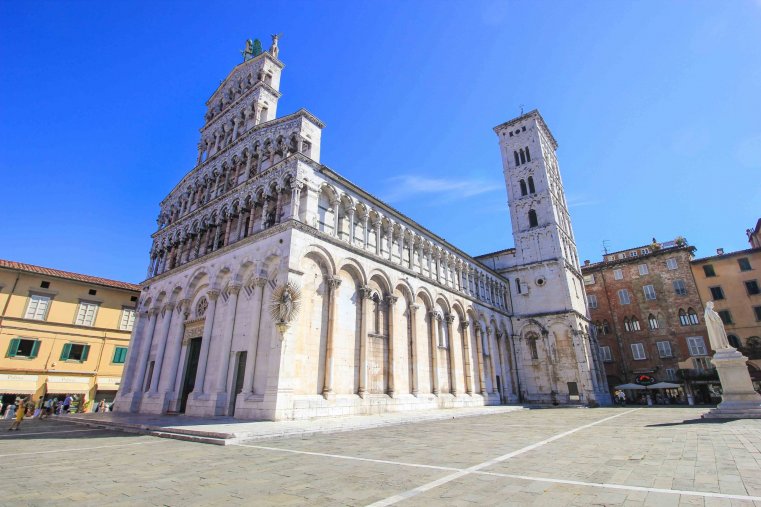 Church of San Michele in Foro

Another highlight and probably the most important attraction of Lucca is the Torre Guinigi Tower.  This 44-meter-high tower, planted with trees, has a significant impact on the cityscape and climbing the tower is one of the most popular activities during a city trip. This so-called gender tower is one of the last from the Middle Ages. At that time, in the early 14th century, more than 250 of these towers had been built in this city. Unique are the centuries-old holm oaks on the top of the tower, which owes its special appearance to the Guinig Tower. By planting the trees, the then patrician family Guinigi was able to proudly call their tower the highest tower of Lucca.

Tip: Still today, you can climb Guinigi Tower. Once you reach the top, you will be rewarded with a fantastic view over all of Lucca. 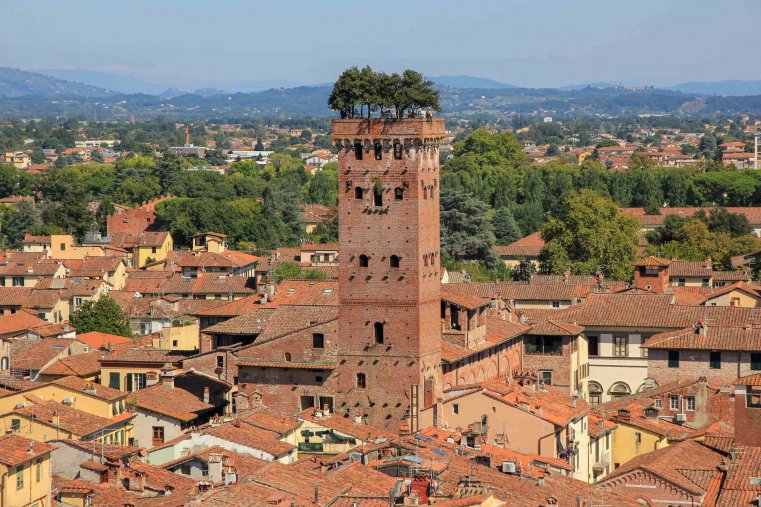 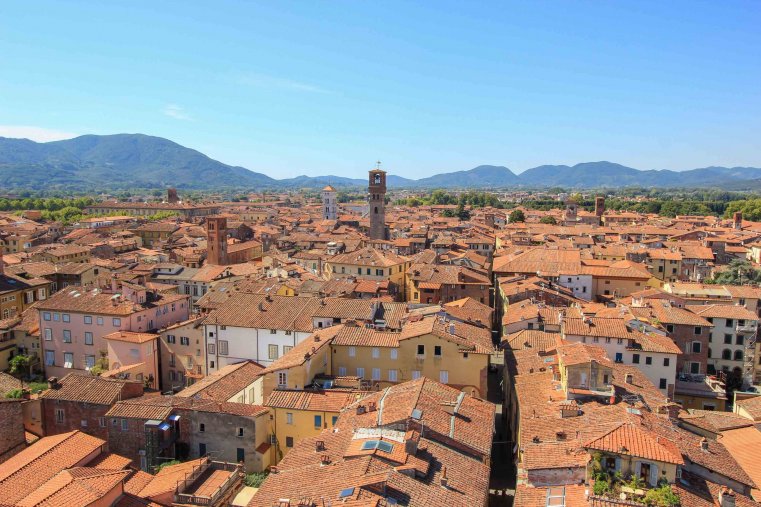 The Cathedral of San Martino was built between 1196 and 1204. Today it is one of the most beautiful church buildings in the city. It is located on Cathedral Square, near the southern city walls. The façade, richly decorated from the outside, is uniquely beautiful, but the interior of this cathedral church with its impressive ceiling mosaics is also worth a visit. Here you can see precious monuments such as the sarcophagus of the Ilaria del Carretto by Jacopo della Quercia from 1406, which is a true masterpiece of the early Renaissance. Also the crucifix Volto Santa, which was carved from Lebanon cedar, is worth seeing. 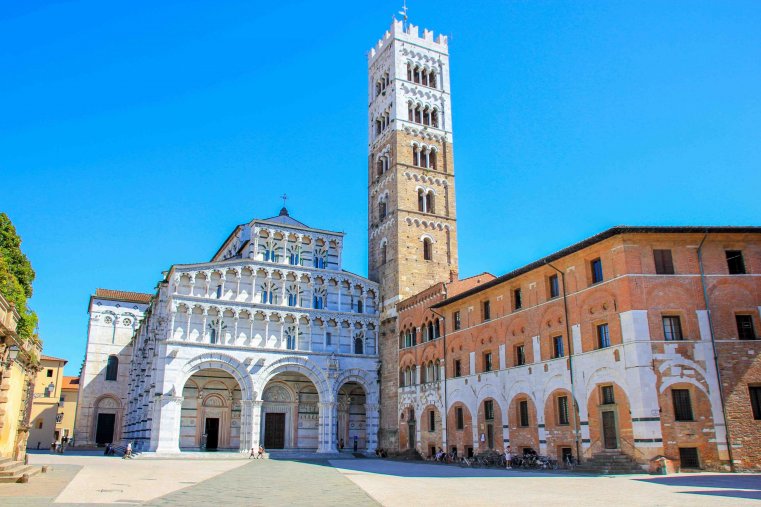 Probably the most important place to visit in Lucca is the imposing, completely preserved city wall. It has a length of about 4 kilometers and completely surrounds the historic center. Several gates, including 6 ancient city gates, grant entrance to the city. In some places the city wall is even up to 10 meters high and offers beautiful viewpoints over the roofs of Lucca. Really beautiful is the circular path running above, which is a real recreation center thanks to the many trees. In the past, the wall was used as a defense system, but today it is a popular place for joggers or to take a long walk in the fresh air.

Tip: If you want to visit the Lucca City Wall, it is best to rent a bicycle or a family tandem and cycle around the historic center. A fun experience at a reasonable price! 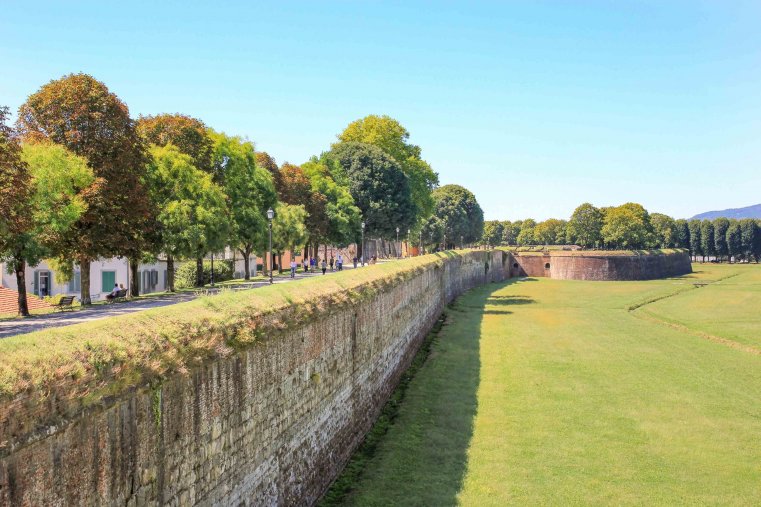 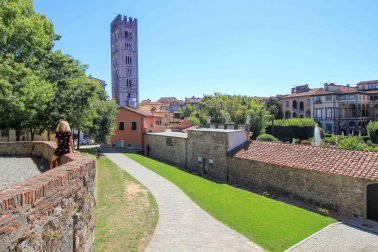 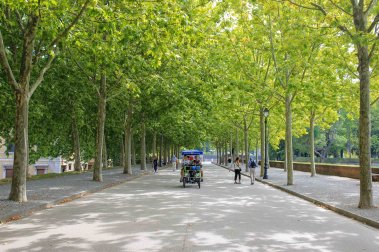 One of the best things to do in Lucca is a visit to Palazzo Pfanner, especially if you are interested in beautiful gardens and palaces. This imposing building was built in 1660 for the wealthy Moricani trading family. However, the palace is named Pfanner after its current owner, who has owned the property since the middle of the 19th century.

Visiting the palace makes you feel as if you travelled back in time, especially when you walk through the picturesque ornamental garden and through the historic rooms of the palace. The heart of this complex is the square with the beautiful fountain in the middle of the garden, which is decorated with countless statues and flowers. 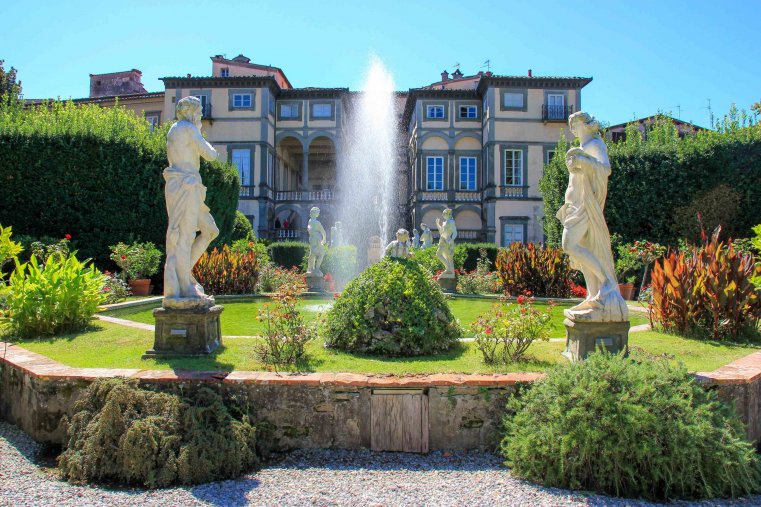 Palazzo Mansi is located in one of the most magnificent mansions in the city and is a true jewel in Lucca. Now a national museum, it is possible to visit the beautiful rooms, decorated with precious frescoes, ancient furniture and tapestries. The most important monuments here are the Salone della Musica (Music Hall), the Hall of Mirrors and the extensive Art Gallery with impressive paintings from the collections of the Medici and the Grand Duchy. 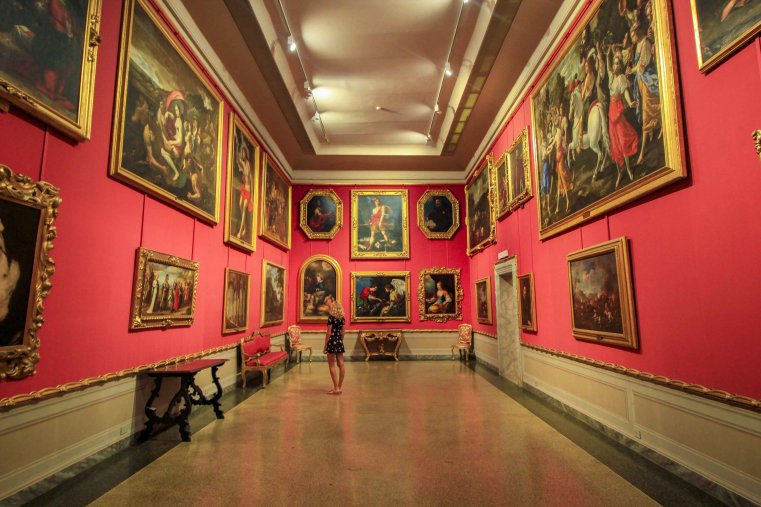 One of the most famous sons of the city is world-famous Giacomo Puccini, who has the title “the greatest composer of Italian operas after Verdi”. He was born in 1858 in the Casa di Corte San Lorenzo, where today the Puccini Birthplace Museum is located. Here, various collections of old photographs, opera costumes, textbooks, manuscripts and other documents of Puccini are exhibited. A real highlight for all Puccini and opera fans.

Tip: Puccini was once a regular guest at Caffé Di Simo in Via Fillungo. Even today, you can still enjoy a lot of nostalgic flair here because much of the former interior has been preserved. 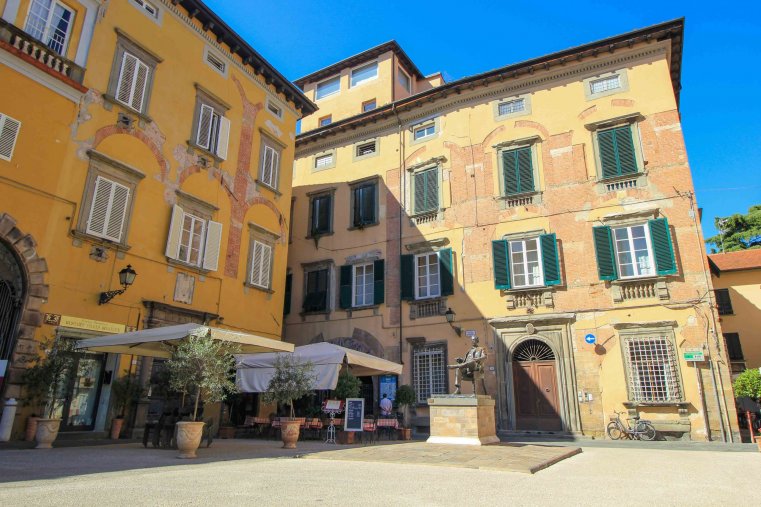 The church Chiesa di San Frediano was built at the beginning of the 12th century and is one of the oldest churches in Lucca. Of particular interest here is the impressive mosaic on the front of the church, which depicts the “Ascension of Christ”. This church can also be visited from inside. It houses, among other things, the glass sarcophagus of Santa Zita, who is still the patron saint of the city. 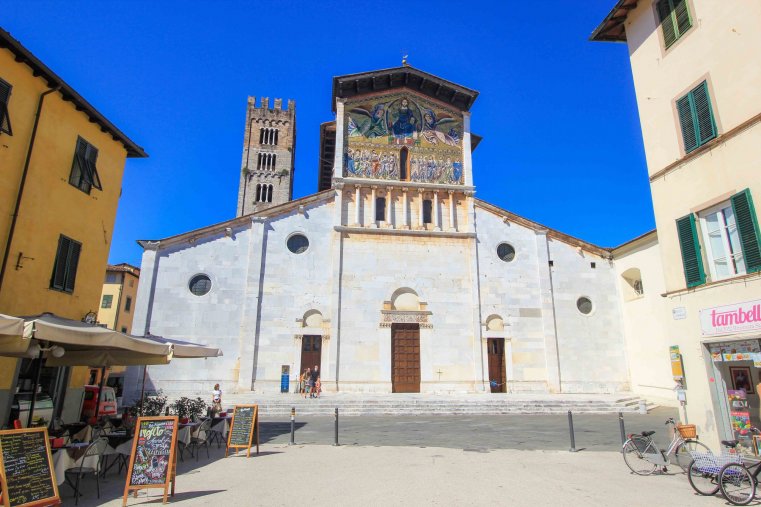 One of the most beautiful viewpoints of Lucca can be found on the top of Torre delle Ore, the so-called clock tower. The climb is quite strenuous, but once you reach the top, you have a fantastic view far beyond the historic center. A real highlight is also the clockwork, which still works and strikes the bell on time. 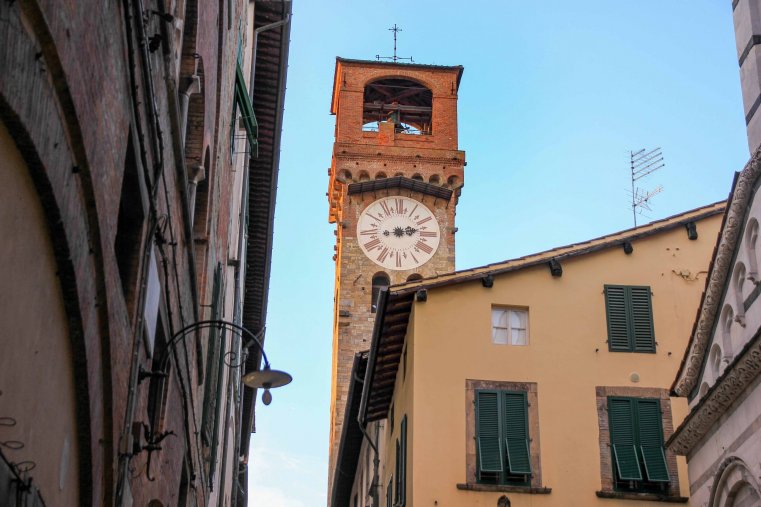 The Botanical Garden forms a small green oasis in the middle of the center. It is located on the southeast side of the old town and covers an area of two hectares. The history of the park dates back to 1820, when it was built at the request of the former Duchess Maria Luisa of Lucca. Even today, botany fans marvel at a whole variety of plants, medicinal herbs and flowers. But the highlight for many tourists is the small lake, where countless turtles cavort. 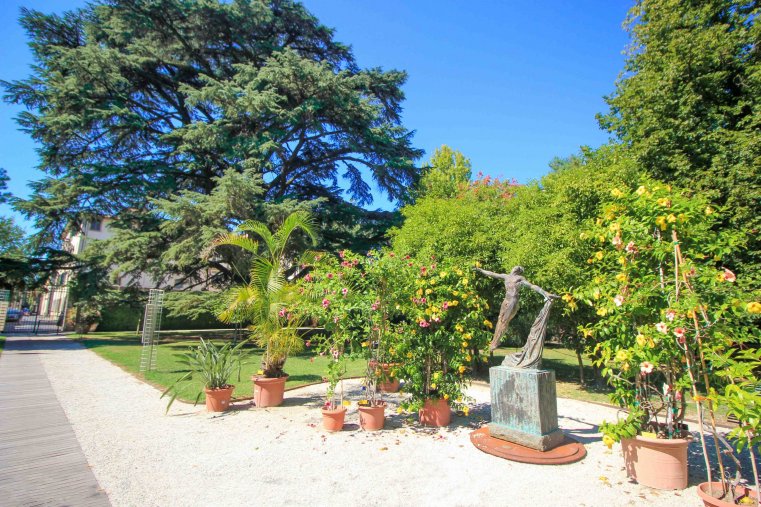 During a city walk through Lucca, a detour to the beautiful Piazza Napoleone, also known as Piazza Grande, should not be missed. This beautiful square had also been the center of political power in history. Even today the buildings of the provincial administration, like the Palazzo Ducale, still occupy a large part of this square. Especially in the summer months, many cultural events and concerts take place here, including the Lucca Summer Festival and the Italian Speciality Market.

An insider tip for Lucca is the underground tunnel system of the city wall, which is located in the southeast of the old town, at the so-called Sortie San Paolino. The special thing about it is that it regularly hosts cultural events and exhibitions, which gives this passageway a unique atmosphere. 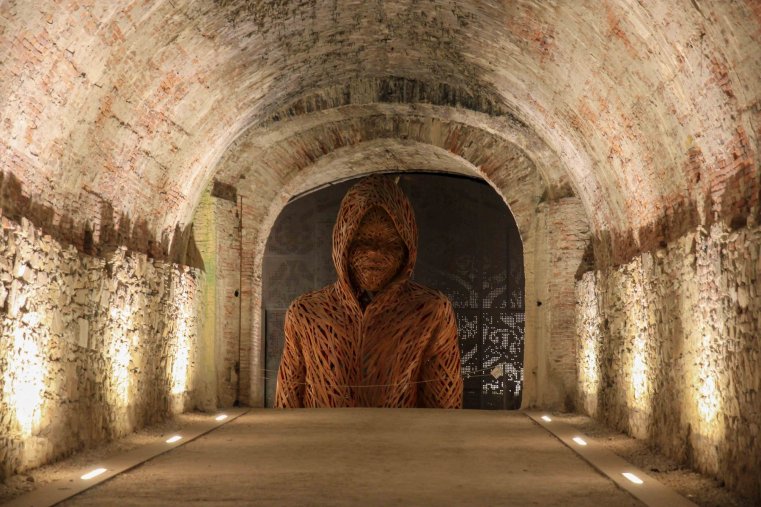 All around Lucca, nestled in a hilly landscape, there are precious villas with magnificent gardens to explore. Some of these pompous complexes have been renovated and can be visited as a museum today. Probably the most beautiful and impressive is Villa Reale di Marlia. The villa has a splendid garden, which is decorated with countless small lakes, pavilions, statues, a grotto and impressive flower gardens. 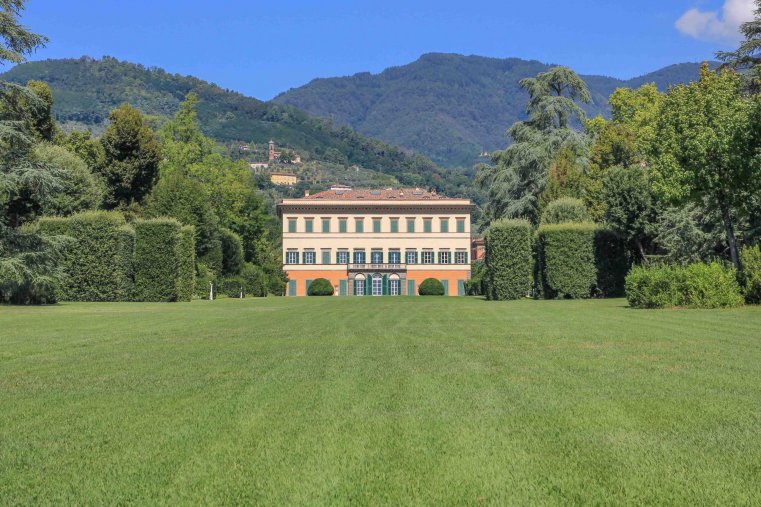 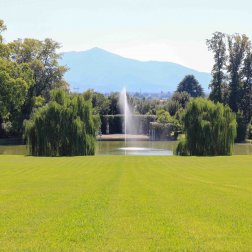 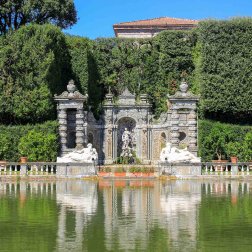 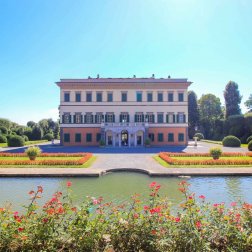 Another important monument in the surroundings of Lucca is Ponte della Maddalena, the so-called devil’s bridge from the 14th century. This arched bridge is a 30 minutes’ drive from the city center and is a popular photo spot along the Serchio River. Many combine a visit to the bridge with a trip to the Garafagnana mountain range. 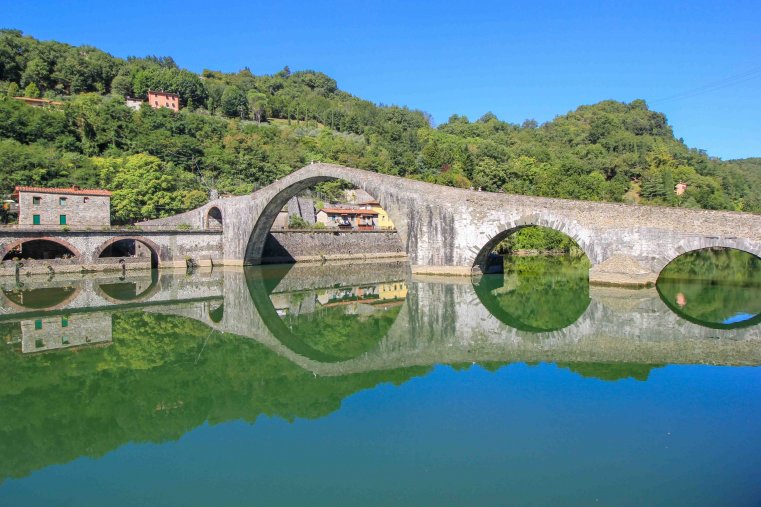 If you don’t necessarily want to explore Lucca and the surrounding area on your own, you have the option of joining a guided tour. On the online portal GetYourGuide you will find not only recommended walking tours, but also tickets for opera evenings, cooking courses, hot air balloon rides, wine tours and excursions in the region.

The reviews are also fantastic, so you can compare before booking!

Where to stay in Lucca

In the old town of Lucca, but also in the surrounding area, there is a fantastic choice of accommodations. From budget hotels to apartments, bed and breakfast and agritourism with pool, everything is available. If you are looking for recommendable accommodation in Lucca, then we can give you these accommodation tips…It’s worth a look!

Find the best accommodation in Pisa:


More places to visit in Tuscany: