The medieval town of Ston is situated at the beginning of the Peljesac peninsula and is probably one of the best travel destinations in Croatia. During a visit you can expect some really amazing things to do and wonderful attractions. This historical place is especially famous for its impressive 5.5 km long wall, which connects the town of Ston with the small dreamy town of Mali Ston. The tasty oysters from Mali Ston Bay are among the best delicacies in the world. Beautiful and interesting is also a walk through the historic alleys of the old town, and a visit to the salt works, where salt has been produced for almost 2000 years.

This comprehensive travel guide contains important information about a visit to Ston in Croatia. We also show you the best things to do, the most beautiful beaches and where to find recommendable hotels and other accommodations.

A holiday in Ston is great for everyone who is looking for something special! The place is also ideal as a stopover for a trip to Dubrovnik. Really nice accommodations can be found in Mali Ston, where you have a beach, the old town and the impressive wall right in front of your door.

Located about an hour’s drive north of Dubrovnik, Ston can also be visited on a day trip. Interesting tours, including oyster tasting or with an additional visit to Korcula, can be found online on GetyourGuide.

Only about 4 kilometers from Ston is the beach Prapratno, a beautiful natural beach, which has already been ranked as one of the best sandy beaches in Croatia by many magazines! 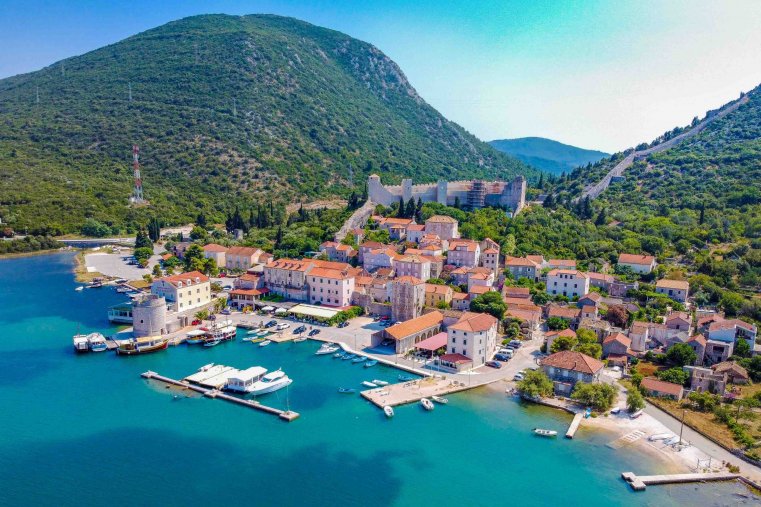 General information about Ston in Croatia

Ston originated under Roman rule when the settlement “Stagnum” was built. The salt gardens and the remains of the fort also date back to this period. In the 14th century, the construction of the fortifications started, which were supposed to control the access to the Pelješac peninsula. The town’s former wealth was achieved with the Salona Ston, the Ston salt works, where salt has been produced for 2000 years.

In 1996, there was an earthquake that caused severe damage to Ston, but left Mali Ston completely unscathed. Until today, however, the town has been almost completely renovated and the wall is once again accessible to tourists. 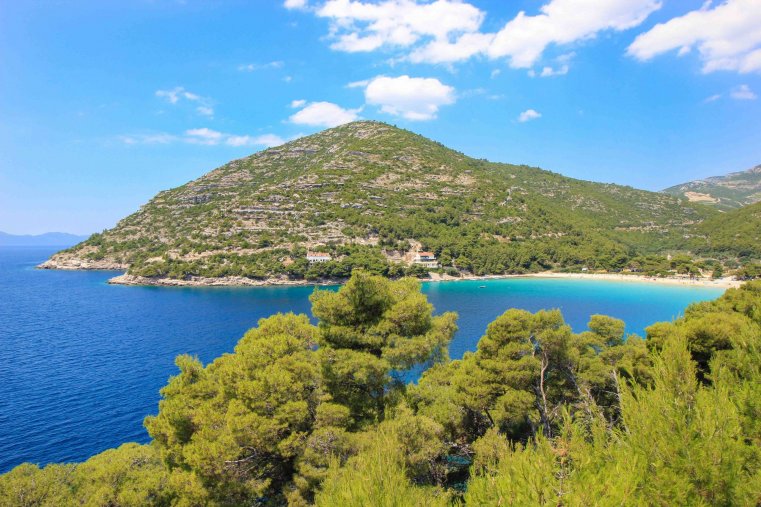 The Wall of Ston

Probably the most important attraction in Ston is the imposing wall. With a length of around 5,500 meters, it is the longest defense wall after the Chinese wall and, thus, one of the most important structures in Croatia. The construction of the mighty wall of Ston began as early as 1333, when the island of Peljesac joined the Republic of Dubrovnik. However, the fortification was not completed until 400 years later. In addition to the foundation walls, this fortification included 3 forts, 7 bastions and 41 towers, some of which are still well-preserved.

Today you can visit the renovated fortified wall and even walk along a large section of it. There is a spectacular path that takes you from Ston to Mali Ston (or vice versa). You will enjoy an incredible view of the historic old towns, the azure sea and the salt lakes.

Tip: The Entrances to the wall are located in both the village of Ston and Mali Ston. 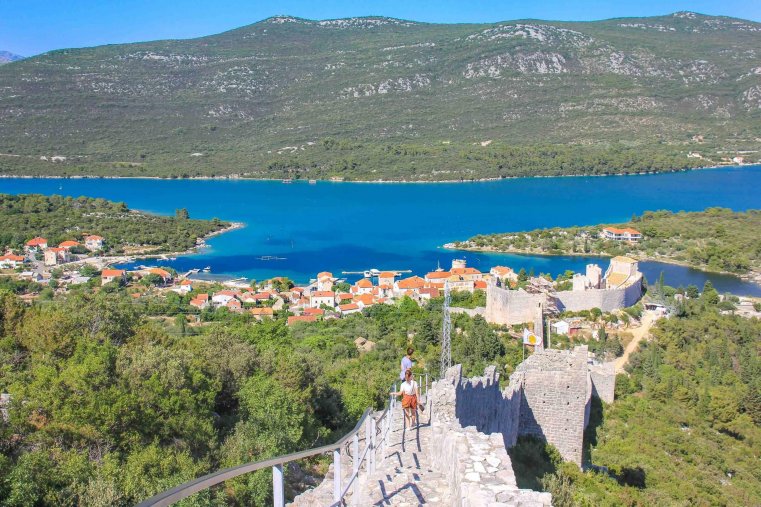 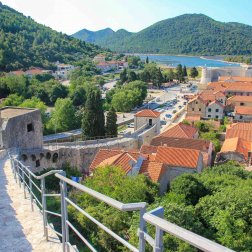 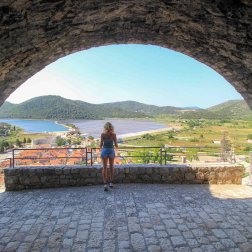 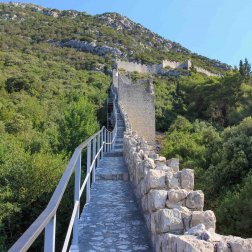 The historic old town of Ston is situated directly at the Stonski Canal and a stroll through the medieval streets and squares will reveal many sights worth seeing, in addition to the historic fortifications. These include beautiful churches and monasteries, such as the 14th century church of St. Nikole with its Franciscan monastery and the Cathedral of St. Blasius (Crkva sv. Blaza). 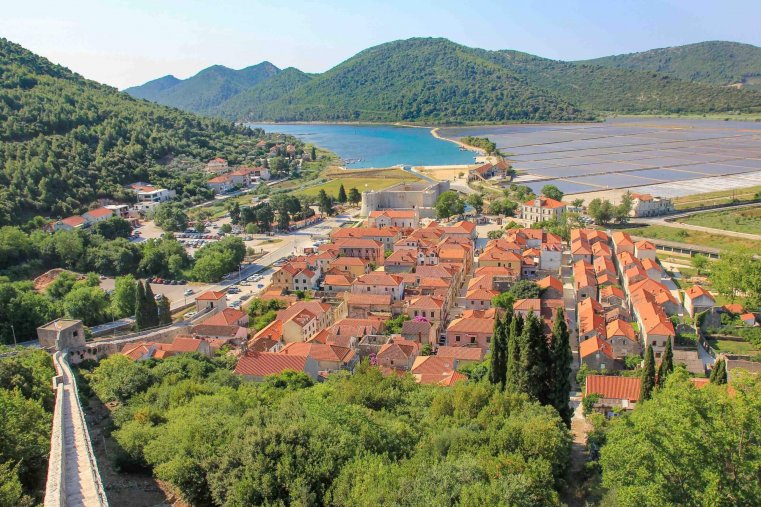 The lovely town palaces of Sorkocevic and Dordic, dating back to the 16th century, are also worth seeing. A visit to the Lapadarium museum is recommended if you want to learn more about the history of Pelješac. Ston also attracts people with its many cozy cafés and good restaurants where you can refresh yourself and taste regional delicacies.

Tip: Parking in Ston is generally subject to a fee. But there are enough parking places around the city Center. 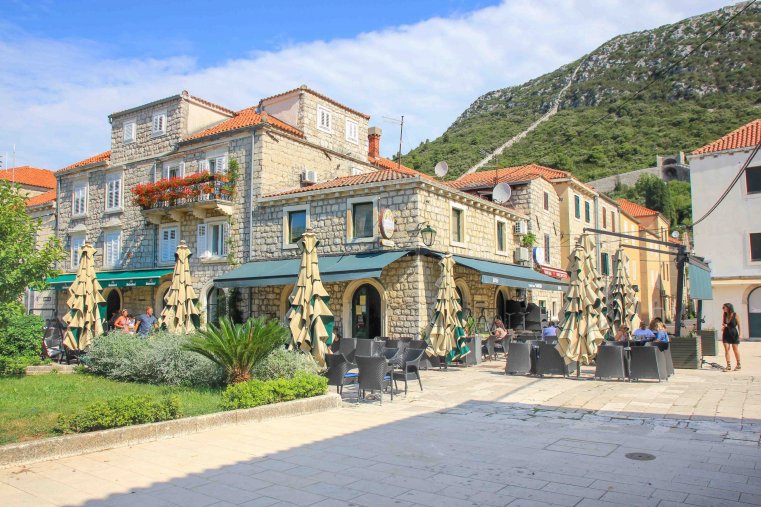 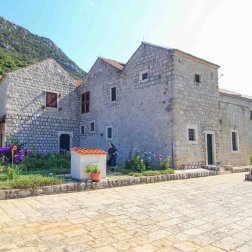 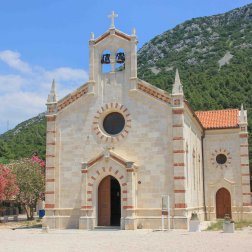 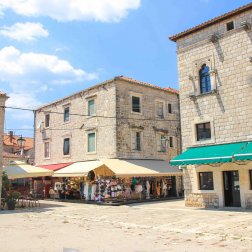 Another interesting sight of Ston is the recently restored fortress. The so-called Fort Kaštio is located on the edge of the old town and offers a spectacular view from above of the nearby salt works and the opposite wall.

Tip: The ticket for the fortress is already included in the entrance fee to the wall. 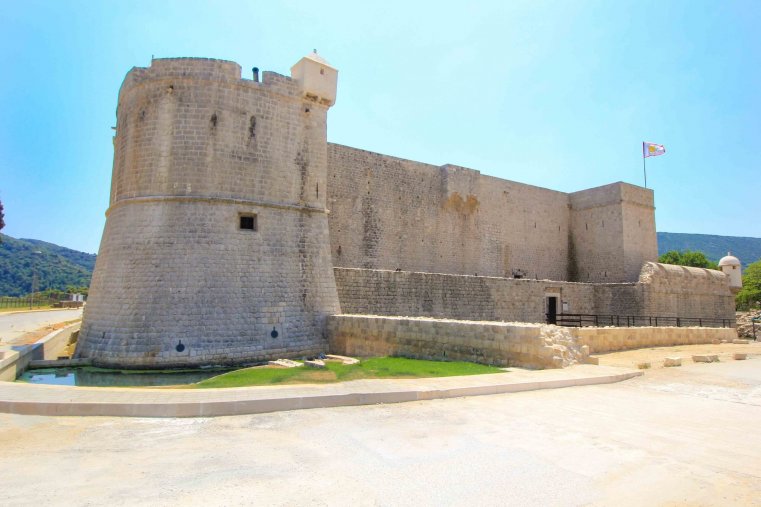 As the oldest salt works in Europe, the salt lakes of Ston are another attraction not to be missed. Already laid out by the Romans, the “white gold” brought prosperity to the region. Very interesting is a visit to the small museum “Solana Ston” where you can learn how sea salt is still produced from the traditional salt production.

Tip: You can buy high quality sea salt at the entrance of Solana Ston! 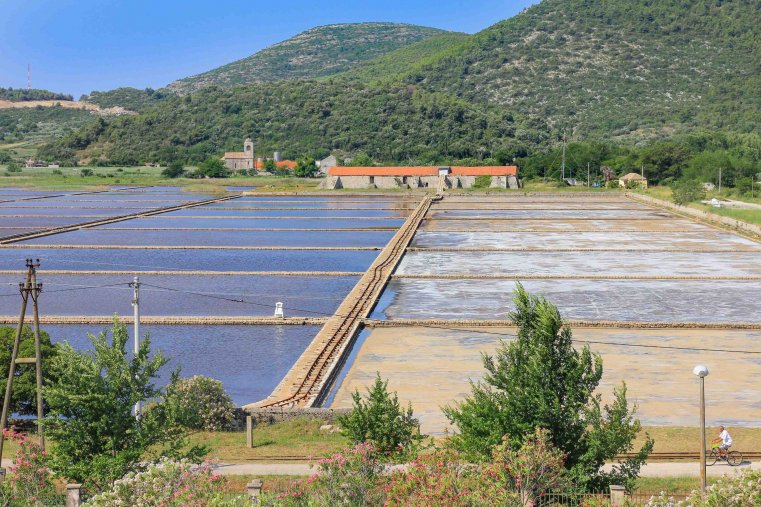 The picturesque town of Mali Ston is beautifully situated on the Malistonski Canal and is famous for its oyster and shellfish farming, but also for its small medieval old town. Particularly worth seeing is the fortress Koruna (Tvrđava Koruna), with its imposing fortified towers, which is connected to the Stoner Wall and where the entrance is also located. Also the small harbor with the watchtower gives the little town a unique character.

But the most beautiful thing here is the unique calm atmosphere, and the small beaches, where you can enjoy the picturesque flair of Mali Ston while swimming in the sea. In the center of the town there are some excellent restaurants, which offer fresh oysters and specialties from the sea.

Tip: There is very nice and magnificent small 3-Star hotel, the Ostrea Hotel, located right on the seafront. 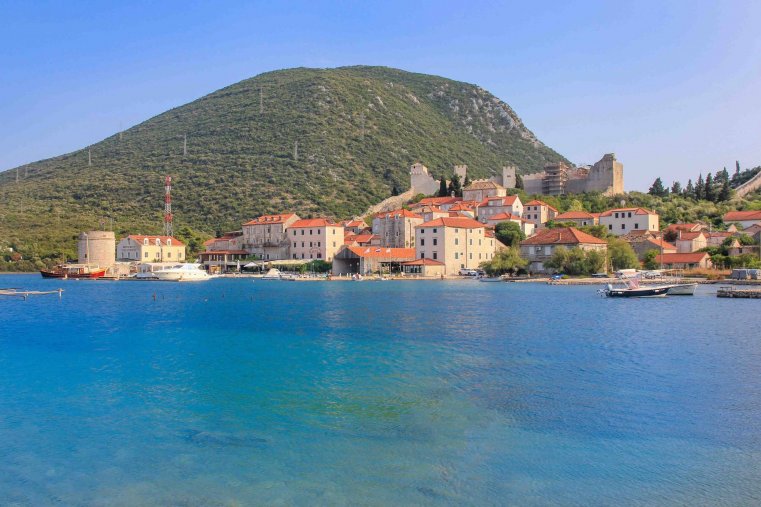 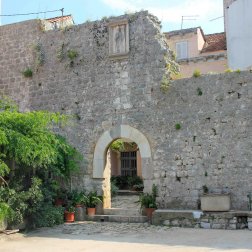 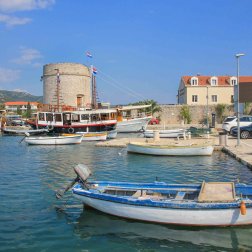 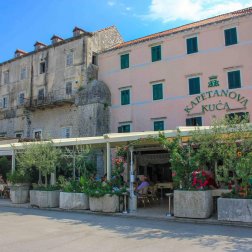 At the lower end of Mali Ston there are two beautiful quiet beaches. These small pebble bays are, thanks to the warm sea temperatures, ideal for swimming. There is usually not much going on here, which means you can really relax on these great beaches. 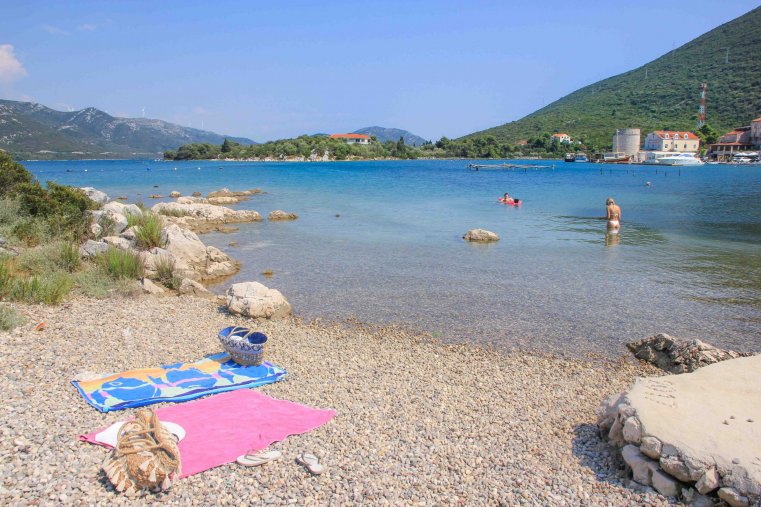 Another wonderful place in Ston is the beach Prapatno, a wonderful natural sandy beach that you will rarely find in Croatia! It’s about 4 km away, located in a breathtaking scenery. This bay shines in the most beautiful sea colors and the beach consists of fine sand, which shallowly drops into the sea. Ideal for small children, but also for those who like to wade through the water. One more reason to spend your summer holiday in Ston! 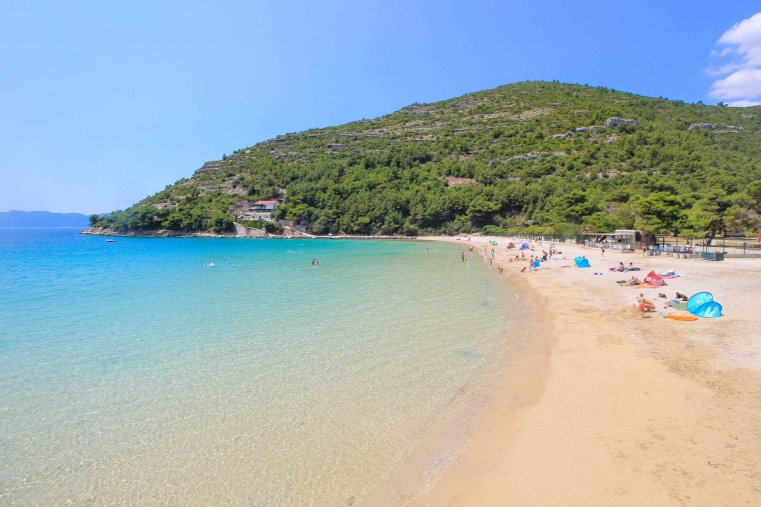 When you visit Ston, an oyster tasting is almost a must. Since the 17th century, mussels and oysters of the highest quality have been cultivated in the bay of Mali-Ston. They are famous throughout the country and are considered to be an extremely tasty delicacy. Also along the coast on the way to Mali Ston, local fishermen offer their oysters for very reasonable prices.

Tip: From the village of Mali Ston there are daily boat trips to the oyster farms with subsequent tasting. 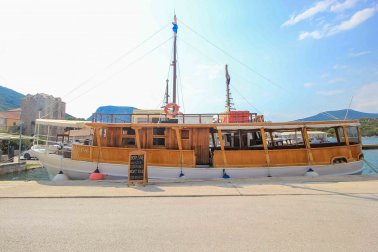 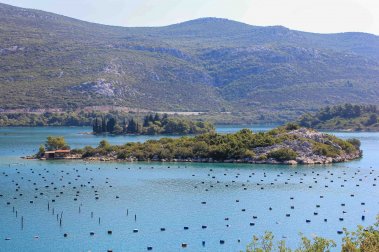 Where to stay in Ston

Ston is a real insider tip for trips to Croatia, and it is definitely worthwhile to stay a little longer. Good accommodations can be found in Ston as well as in Mali Ston. For a holiday, the village Mali Ston is almost more suitable as there are also 2 small beaches and many good restaurants. Here are our accommodation recommendations… It is worth a look!