Dvigrad is a really impressive abandoned medieval town in Istria, not far from the larger resorts of Rovinj and Porec. When visiting this ruin city, people are amazed by the well-preserved remains of the once imposing medieval fortress, and you will feel a bit transported back in time when you walk around the area. Touristically still little developed, you explore this abandoned castle sometimes all to yourself, which gives the mystical ruined city a very special “lost place” atmosphere. Maybe that’s why Dvigrad is still a real insider’s tip, which should not be missed on any trip through Istria.

In this travel guide you will find all the important information about Dvigrad in Croatia. We show you amazing pictures and give you lots of tips that will definitely help you plan your excursions.

The easiest way to reach Dvigrad is by car. However, many also undertake a tour by bike from the surrounding resorts in the area, to the abandoned medieval town.

The ruined town of Dvigrad is definitely one of the must-see places in the hinterland of the Istrian peninsula! For more, check out this guide about the best places to visit in Istria.

In the high season, a small snack bar with regional cuisine and souvenirs opens right next to the ruined town. In addition, free parking is provided there for guests.

If you are looking for fantastic accommodation near Dvigrad, we can recommend you the Apartments Faris with pool and the beautiful vacation house Villa Grguci. 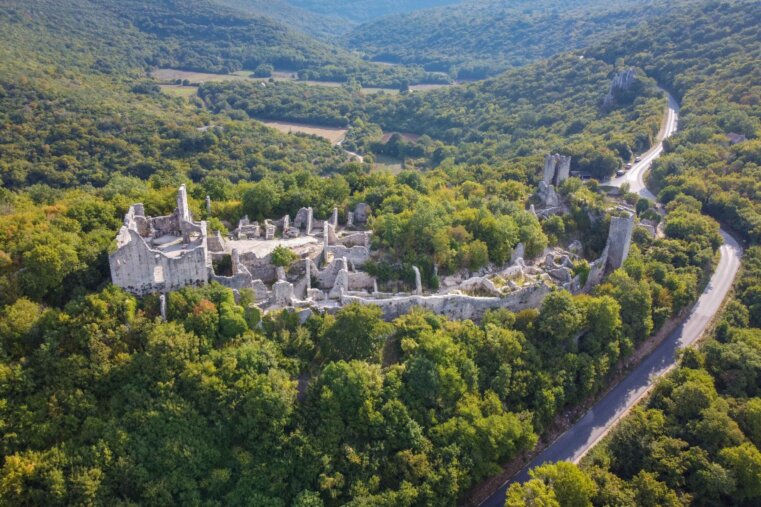 The ruins of Dvigrad are located in the heart of Istria, in the so-called Draga Valley, and were declared a cultural heritage site in 1997. As a result, renovations and restorations started, as well as excavations, which have brought to light new findings about life there in the Middle Ages. The name Dvigrad means “two towns”, which indicates that originally there were two castles. Today you can still visit the remains of the northern castle Moncastello, while the southern castle Castel Parentino was already destroyed in the 10th century.

In its heyday, this town is said to have had up to 1,000 inhabitants. Thanks to its favorable location, a source of drinking water and fertile land, Dvigrad represented an important commercial center of the region. More than 200 structures, including houses, fortifications, towers, gates, streets, churches and city walls were part of the then city of Dvigrad. It is also interesting to note that the town was never destroyed, but was abandoned at the end of the 17th century. Therefore, today a large part of the walls still stands, and one is amazed by the ruins from the Middle Ages, some of which are still well-preserved.

At that time, the city was surrounded by double protective walls, there were three city gates, and within the complex stand three towers from the 14th century. Probably one of the most significant attractions in Dvigrad is the church of St. Sofia. Until today, it towers over the ruined town at the highest point of the former village. Its shape of a 3-nave basilica, this large ruined church dates back to the 13th century, although its origin is said to have been as early as the 5th century. 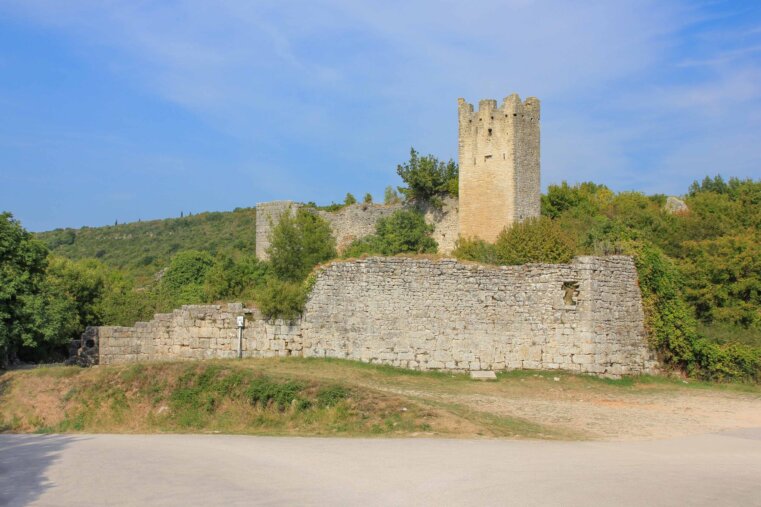 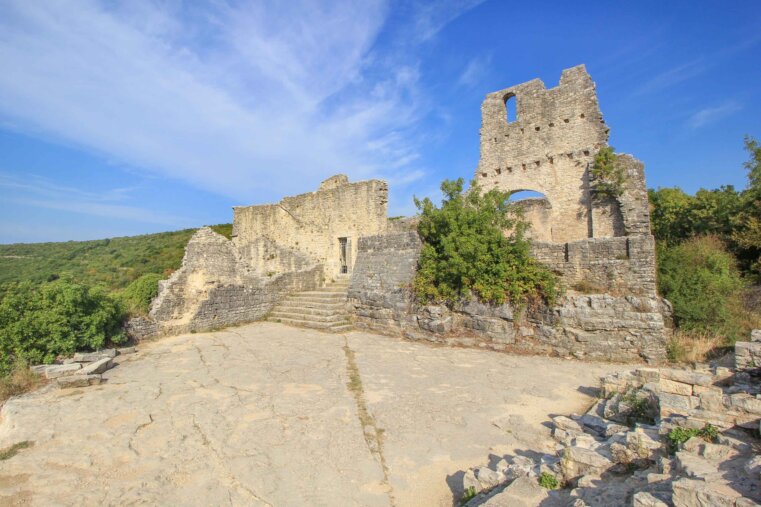 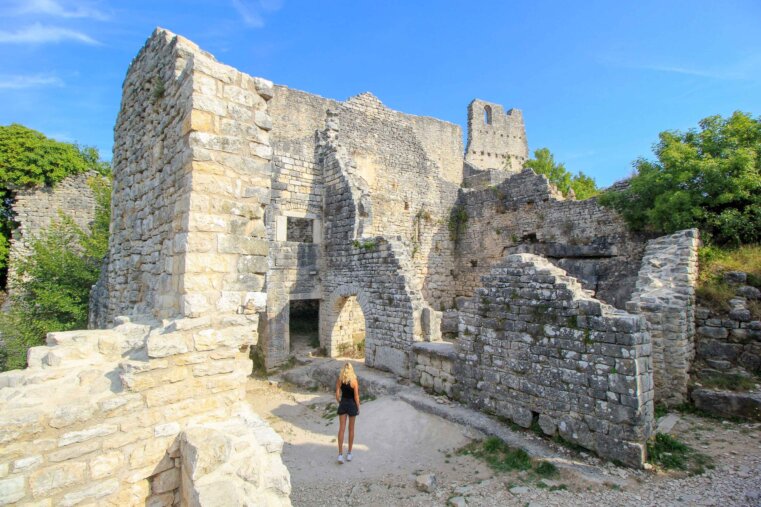 The history of Dvigrad goes back to the time of the Illyrians, with the settlement being mentioned in writing for the first time in the 9th century. Excavations show that the oldest ruined church probably dates back to the 5th-6th centuries. During the history the castle was attacked several times, plundered and afflicted by diseases. The town of Dvigrad received a strong setback especially in the 16th century, when there was a permanent conflict between Venice and Austria. In addition, the plague raged shortly thereafter, and there was a malaria epidemic. Around 1631, almost all the inhabitants left the village and fled to the surrounding towns or died from the diseases. Only the poorest stayed until finally 20 years later the town was abandoned.

There are numerous exciting legends about the ruined city. Even the infamous pirate Captain Henry Morgan is said to have hidden his treasure from the Caribbean in Dvigrad Castle when he fled from the English into the Limski Channel. To this day, however, this pirate treasure has not been found. Instead, the “Route of Captain Morgan” takes cyclists from Rovinj to the most beautiful places in the area to the ruined town of Dvigrad. 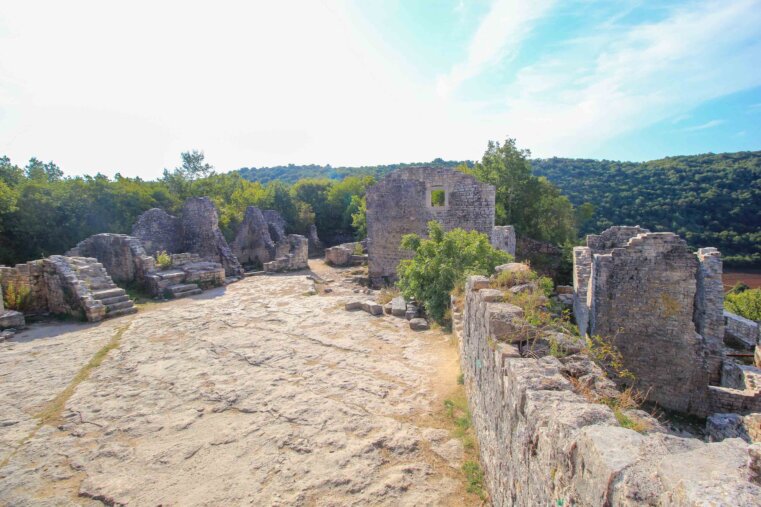 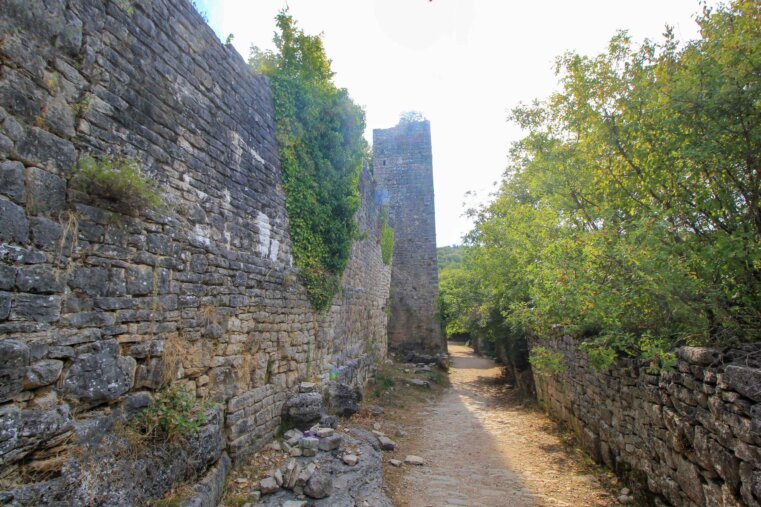 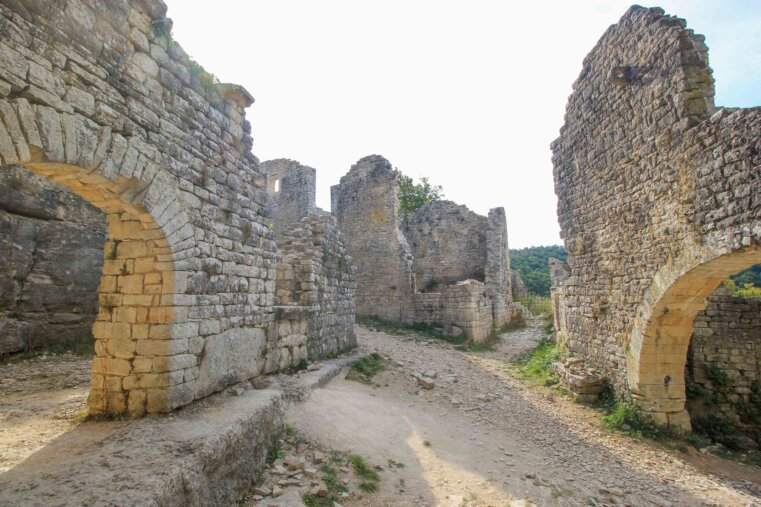 Near the ruined town of Dvigrad you will find some nice accommodations. Most of the places to stay are privately owned apartments or cottages in a quiet location. If you are looking for tips for accommodations near Dvigrad, then we can give you these recommendations on the way…It’s worth a look!