The Costa Blanca, the famous white coast in Spain, which is located in the province of Alicante, is one of the most popular and certainly one of the most spectacular holiday destinations in the country. Every year, countless visitors from all over the world come to explore this fantastic region with its many beautiful attractions and want to spend their holidays in the resorts of Costa Blanca. A mix of dream beaches, vibrant nightlife, picturesque old towns and beautiful nature awaits you here. In addition, the mild Mediterranean climate guarantees lovely vacation days almost all year round. But what are the most worth visiting places on the Costa Blanca, what are the insider tips and where can you best spend your vacation?

In this travel guide, we give you all the important tips and information about holidays on the beautiful Costa Blanca in Spain. We show you awesome pictures, the most beautiful places, the best beaches and where you will find fantastic accommodations.

The Costa Blanca is the 200-meter coastline of the province of Alicante and is perfect for a beach vacation in Spain. Here is a summary of the most beautiful bays and beaches in Alicante at a glance.

Thanks to the mild climate with average temperatures of 18 degrees Celsius, you can travel the Costa Blanca all year round. With over 300 days of sunshine, there is plenty of sunshine and relatively little rain even in winter.

There is a wide choice of amazing things to do at Costa Blanca! You can find a great selection of cheap tickets for aqua and amusement parks, trips to waterfalls, or tapas tastings on GetYourGuide! 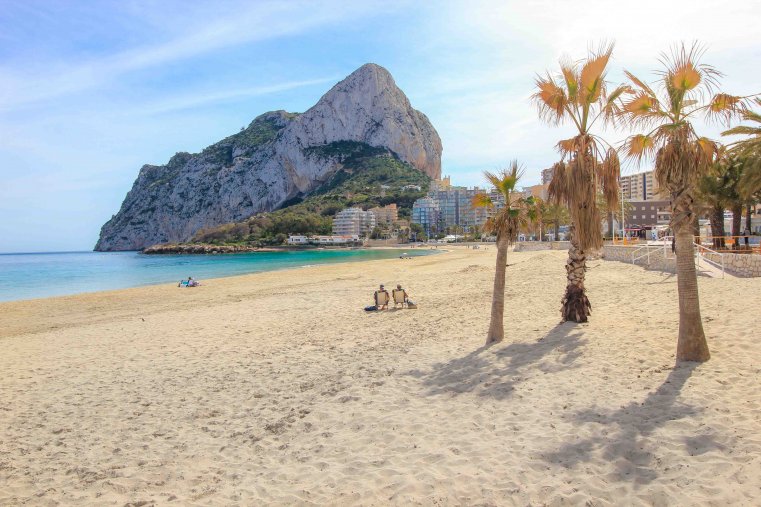 Geographically, the Costa Blanca belongs to the state of Valencia, which borders on Catalonia in the north and Murcia in the south. Over a length of around 200 kilometers, the so-called “White Coast” offers travelers an impressive range of fantastic beaches and numerous wonderful holiday resorts. The dreamlike coastline of the province of Alicante has been named “Costa Blanca” since 1950, and indeed, the light sandy beaches and many white villas and houses do justice to this name.

But not only do summer vacationers appreciate the Costa Blanca, but this holiday region is also worth a visit in spring and autumn. The perfect climate with over 300 days of sunshine and an average annual temperature of 17 degrees Celsius enables a wide range of leisure activities, such as hiking, golfing, cycling and sightseeing all year round. 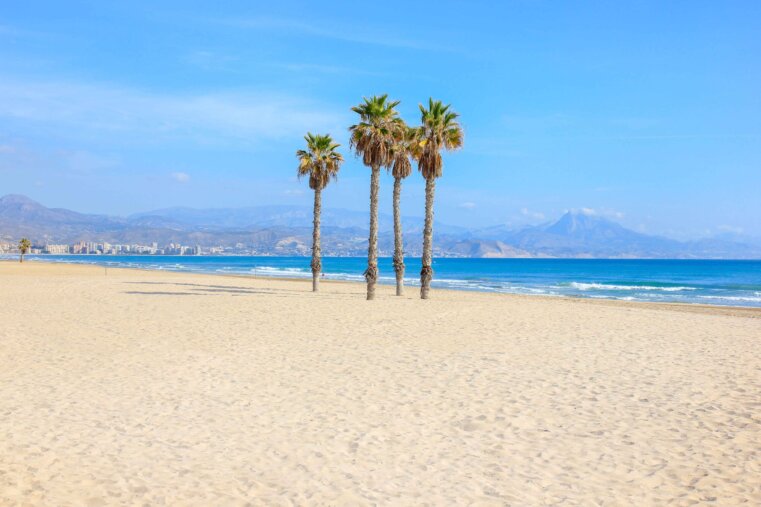 The most beautiful places on Costa Blanca

During a visit to Costa Blanca, countless fantastic highlights and things to do await you. As diverse as the landscapes of this coast are, so are the various holiday locations. To make it easier for you to choose the perfect place to stay, we have summarized the most beautiful places on Costa Blanca at a glance.

Benidorm is probably the most popular and also the largest holiday resort on the Costa Blanca. Particularly impressive is the spectacular skyline along the coast, which has given the city the nickname “the Manhattan of Spain”. Nowhere else in the province of Alicante can you find such a high density of high-rise buildings and skyscrapers. The metropolis is also known as the region’s party metropole. There is a lot going on, especially in the high season, which many of the holidaymakers appreciate, but also some who would rather avoid it.

Worth seeing in Benidorm are, above all, the beautiful long sandy beaches, the wonderful attractions, the vibrant nightlife and the many cool amusement parks. If you would like to spend your holiday in Benidorm, you will find a huge selection of apartments and hotels here.

Tip: In the largest resort on the Costa Blanca, you’ll find a great selection of spectacular amusement parks. Cheap tickets for aqua parks, zoos and amusement parks can be found on GetYourGuide. 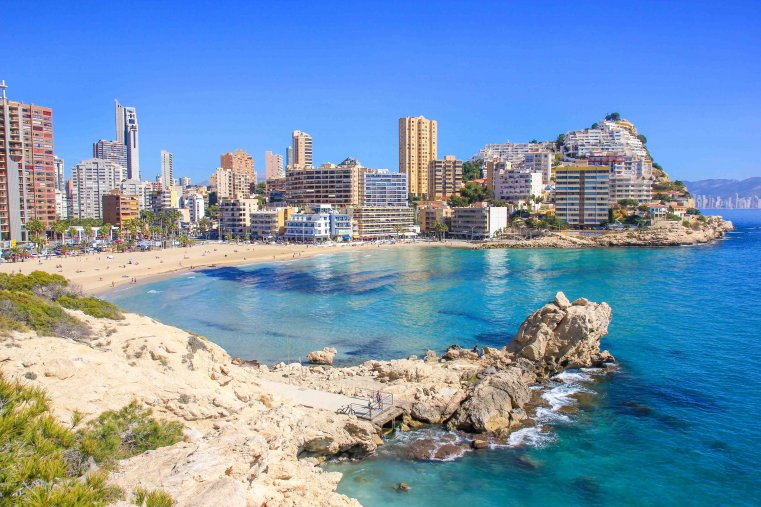 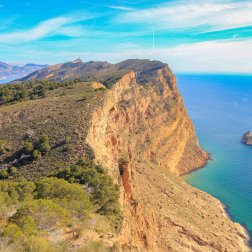 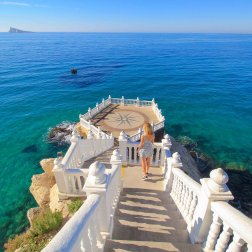 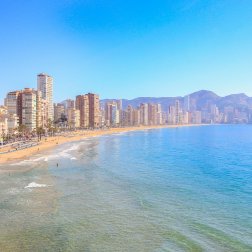 An absolute highlight of the province of Alicante is the wonderful holiday resort of Calpe. It’s centrally located on the Costa Blanca and many consider it to be the best place for a holiday on the coast. The town is famous for its mighty rock, the Ifach Mountain, which shapes the landscape there, and gives the fantastic beaches of Calpe a particularly beautiful backdrop. With its striking appearance, it has already become kind of a landmark for a holiday on the Costa Blanca.

Although there is a good touristic offer with nice cafes, good restaurants and accommodations, compared to Benidorm, Calpe is a lot quieter and a good alternative. On a trip to Calpe, you will also find wonderful sandy beaches, a colorful old town, spectacular viewpoints and even pink flamingos, which have settled in a salt lake in the middle of the city center.

Tip: In Calpe there is a whole range of good hotels, such as the Gran Hotel Sol y Mar with a prime location right on the beach and with a wonderful view of the Peñon de Ifach. 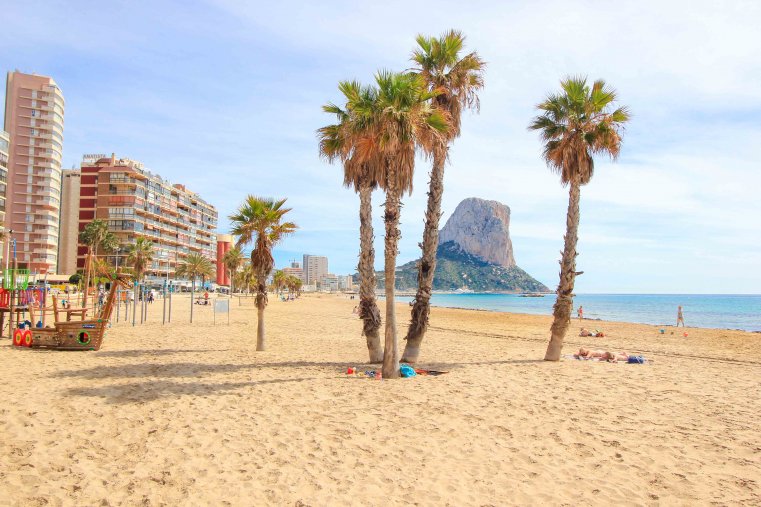 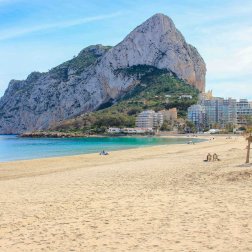 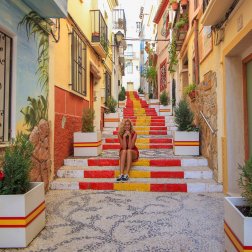 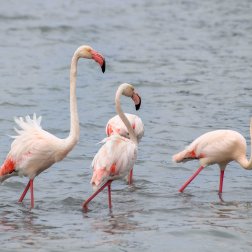 Javea, also known as Xabia in Valencian, is another popular place to visit on the coast of the Costa Blanca. Located in an extremely charming landscape, this stretch of coast enchants with magnificent beaches, steep cliffs and fantastic viewpoints – the so-called Miradores. In this holiday region, there are some of the most beautiful beaches on the Costa Blanca, which ensure unforgettable holidays in the Mediterranean. But also the old town with the Església de Sant Bertomeu church, the harbor with the auction hall and the lively Arenal beach, which forms the tourist center, are worth seeing!

Tip: If you prefer it quiet and tranquil and want to swim on the most beautiful beaches of the white coast, we can recommend the accommodation Villa Bombon near the dream beach Granadella. 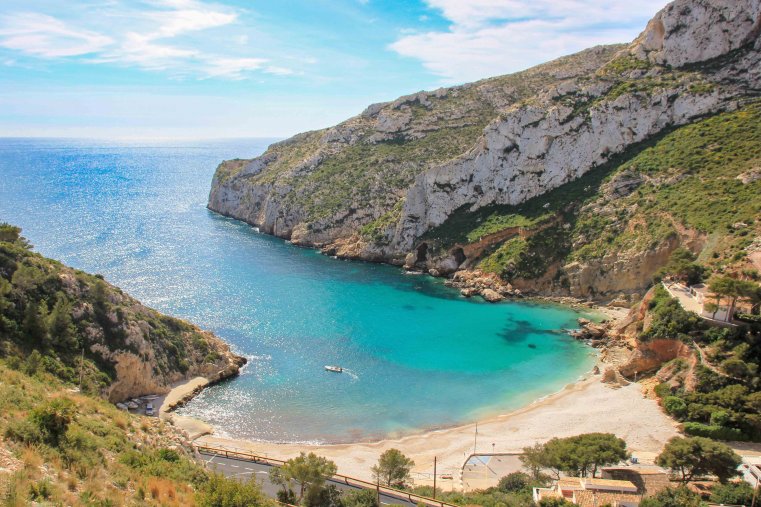 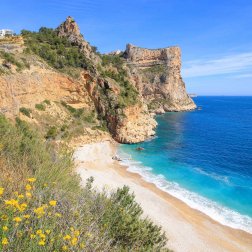 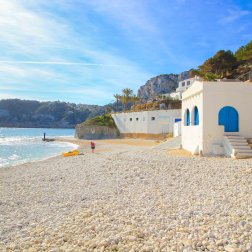 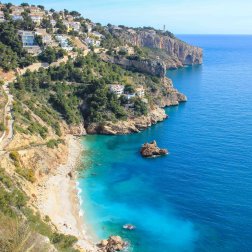 The coastal town of Altea is another gem on the Costa Blanca. Especially impressive is the snow-white old town, which is located on a hill with a magnificent view of the sea and enchants with an extremely romantic backdrop. But also the beaches around Altea and in the neighboring town of Albir are beautiful and perfect for a wonderful beach vacation. The tourist center is located along the picturesque waterfront promenade, where many good restaurants and cozy coffee shops are lined up. The long bay impresses with a beautiful light pebble beach, unique sea colors and great views of the Sierra Helada Nature Park to the north.

Tip: The Casa fleur casco antiguo is a brilliant accommodation tip! Here, the tasteful furnishings, the terrace and the magnificent view of the sea will delight you. The central location near the old town is also amazing. 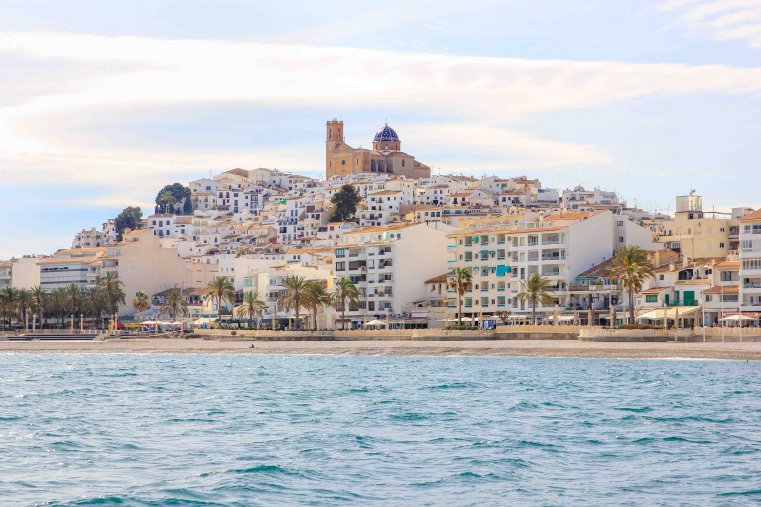 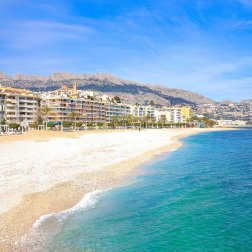 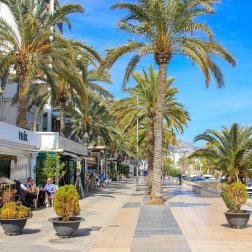 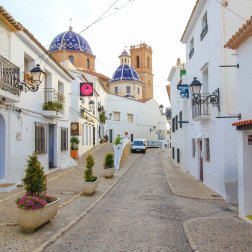 Moraira is a picturesque coastal town and a guarantee for a dreamlike and relaxing holiday in Spain. This former fishing village is a real insider tip on the Costa Blanca. The old town with the small castle as a landmark is beautiful here, as is the pretty promenade in the center, where there are numerous great cafes and good restaurants. But also the beaches in and around Moraira are breathtakingly beautiful. Above all, the dream beach Playa del Portet is fantastic and a wonderful bay for a beach holiday.

Tip: The fantastic accommodations, such as the HOTEL MAÑET with pool or the huge vacation apartment Moraira Beach in the best location, are also recommended here. 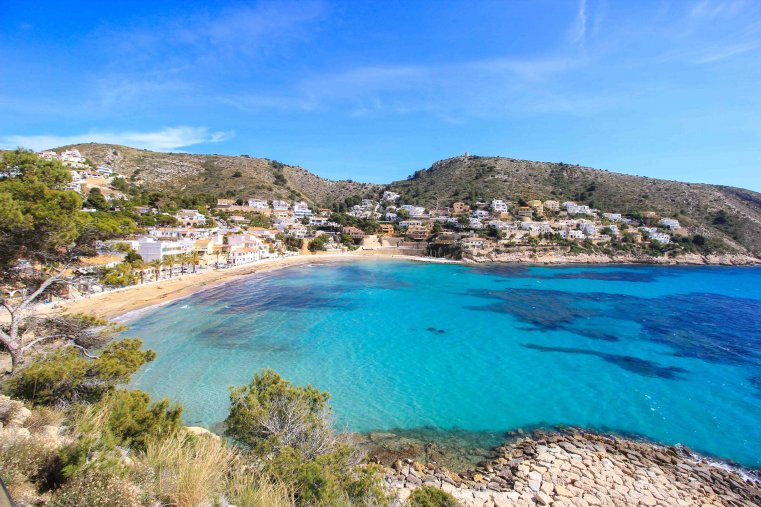 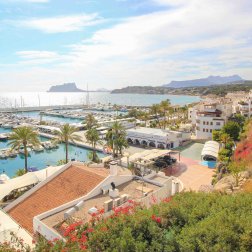 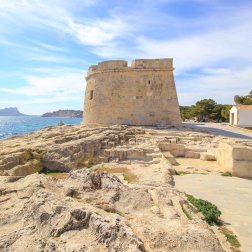 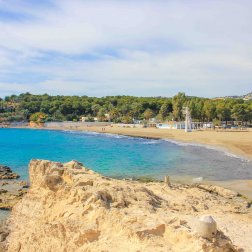 The port city of Alicante is the capital of the province of the same name, Alicante, which is located at the southern end of the Costa Blanca. Beautiful is the colorful old town Barrio de la Santa Cruz with its narrow streets and the medieval Castillo de Santa Bárbara, an imposing fortress that is situated on a hill above the city with an impressive sea view. In the city center you will find the city beach, the Playa del Postiguet, a beautiful sand beach with a view of the castle. However, the beautiful Playa de San Juan is best suited for a holiday. Here you will find a long, bright sandy beach with azure blue sea and tall palm trees, where you can spend wonderful days by the sea. 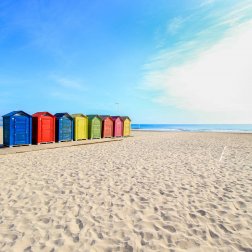 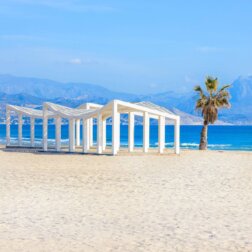 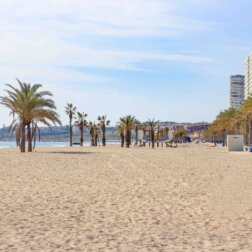 The colorful coastal town of Villajoyosa is probably unique on the entire Costa Blanca. This place is particularly famous for its countless colorful houses, which give the city an extraordinarily beautiful flair. The wonderful beaches are also fantastic, some of which are among the most beautiful on the entire Costa Blanca. Due to the perfect location on the coast, this coastal town is a popular spot for an excursion, but a vacation in Villajoyosa is also a good choice, especially for those who prefer something a little quieter.

Tip: Many individual travelers appreciate this place for a quiet vacation on the Costa Blanca. Really ingenious is the La Punta COLORS By DLV with pool on the roof terrace. 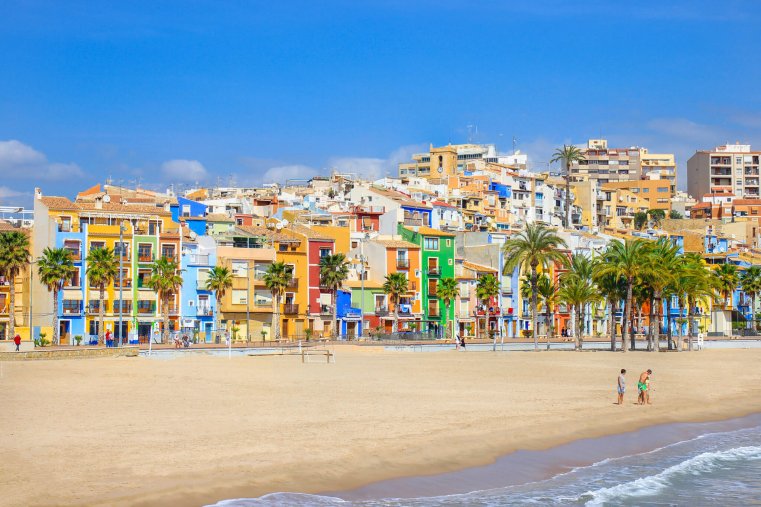 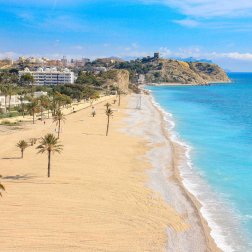 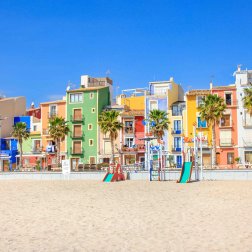 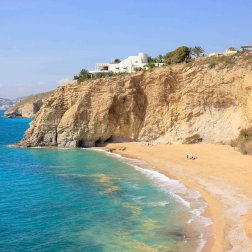 More about the Cost Blanca: