The picturesque little town of Pitigliano is probably one of the most charming highlights of Tuscany. Situated on a high tuff rock, it towers majestically over the narrow, green valleys of the Maremma. Here the extremely picturesque townscape with its brown-red stone houses built close together up to the rock face is particularly fascinating. The most important attractions in Pitigliano are the medieval stone alleys of the historic old town, the small museums and the Jewish quarter. But there are also many exciting things to do in the area around, thanks to the rich Etruscan heritage!

In this travel guide we give you all the essential tips and information on Pitigliano in Italy. We also show you beautiful pictures, the best things to do and where you will find fantastic accommodations.

Especially popular for a vacation is the astounding choice of agritourism accommodations in the surroundings of the city. The Agriturismo Eco-Bio Villa Vacasio with its beautiful pool and delicious food is highly recommended.

The most amazing viewpoint of Pitigliano is on Via San Michele near the cemetery. In this street you can also park your car and only in a few steps you are in the old town.

It’s worth spending some days in this region! Because there are other interesting attractions in the surroundings, like Sorano, Sovana and the Saturnia Hot Springs.

You should try the white wine grown in Pitigliano, the so-called “Bianco di Pitigliano” and the delicious Sfratto, a Christmas pastry with a sad history. 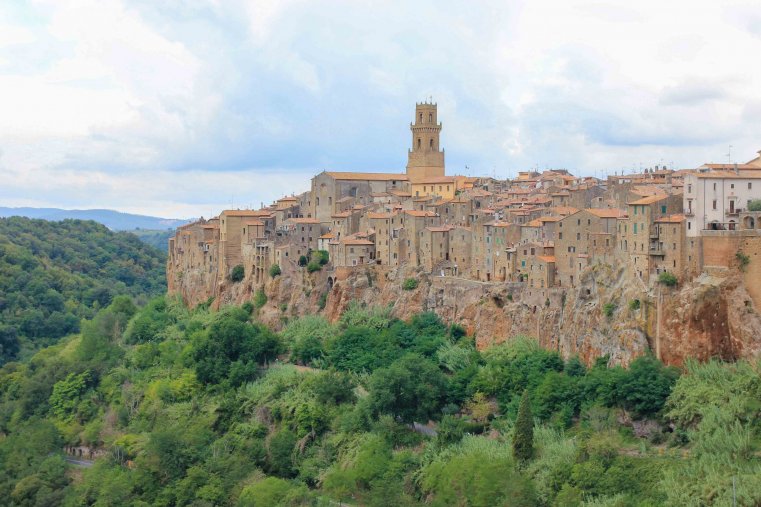 The town of Pitigliano, with a population of around 4,000, is situated on a tuff rock about 300 meters high, surrounded by the deep canyons of the two rivers Lente and Meleta. In addition to these natural gorges, there are also many Etruscan cave paths around the city, the so-called Vie Cave, which were carved into the stone by human hands thousands of years ago. There are also numerous archaeological sites of the Etruscan necropolises in the area, which are witnesses of this period.

The history of the city goes back 3,500 years to the Etruscan period, and it was first mentioned in a document in 1061. In the Middle Ages, Pitigliano was ruled by the noble family Aldobrandeschi, later from 1312 onwards by the Orsini and from 1604 by the Medici, during which time the Jewish Ghetto was also established. 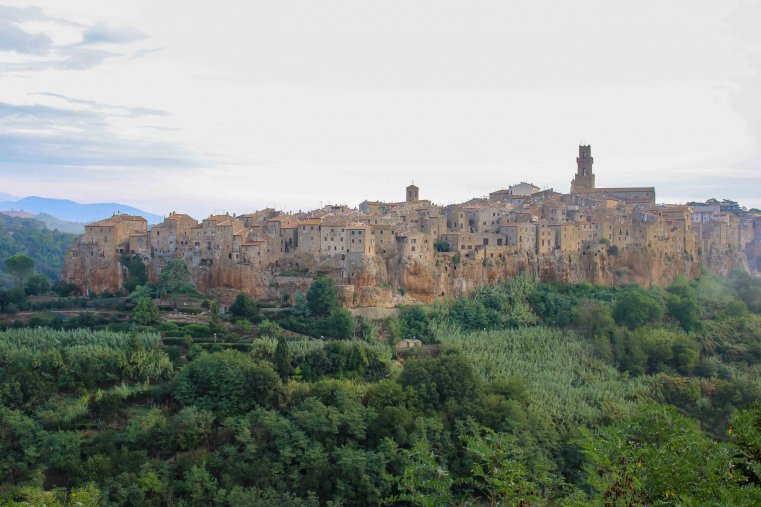 Best Things to Do in Pitigliano

A visit to the medieval town of Pitigliano is considered to be one of the best things to do in Tuscany and is therefore a highlight of every trip. During a stroll through the alleys of this picturesque old town, there is a lot to discover, but also the surroundings with the Etruscan cave paths and the necropolis are interesting and worth seeing!

The old town of Pitigliano is partly surrounded by a medieval wall with historical gates, such as the beautiful Porta della Cittadella providing access to the center. At the lower end of the town, a few steps lead down to the Porta di Sovana, another medieval town gate. Just before you get to it, there are some remains of the Etruscan city wall.

Also impressive is the old Medici aqueduct from the 17th century, which with its round arches dominates the cityscape. At that time, it was the first of its kind to be built in the entire Maremma region. 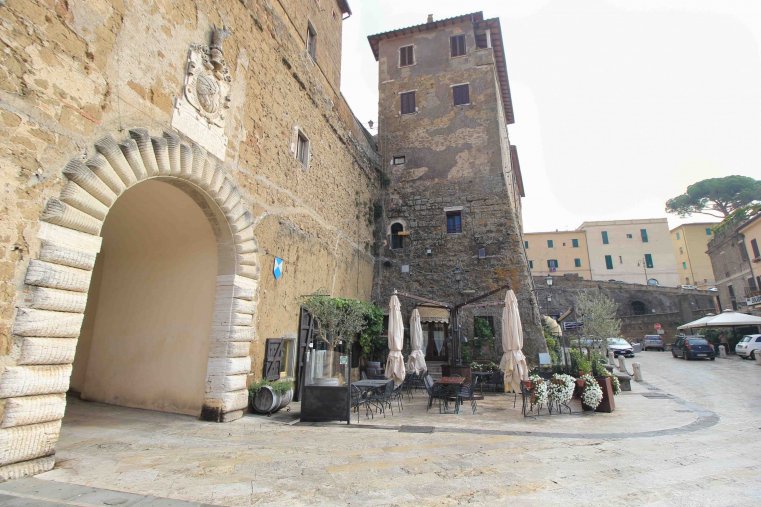 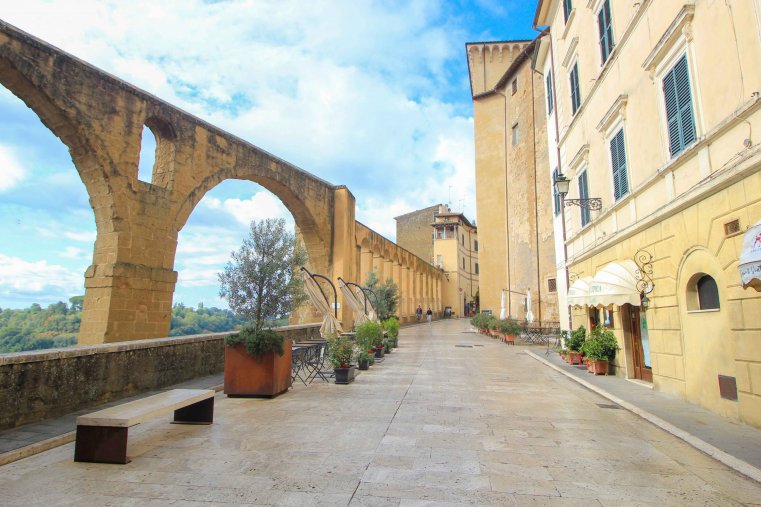 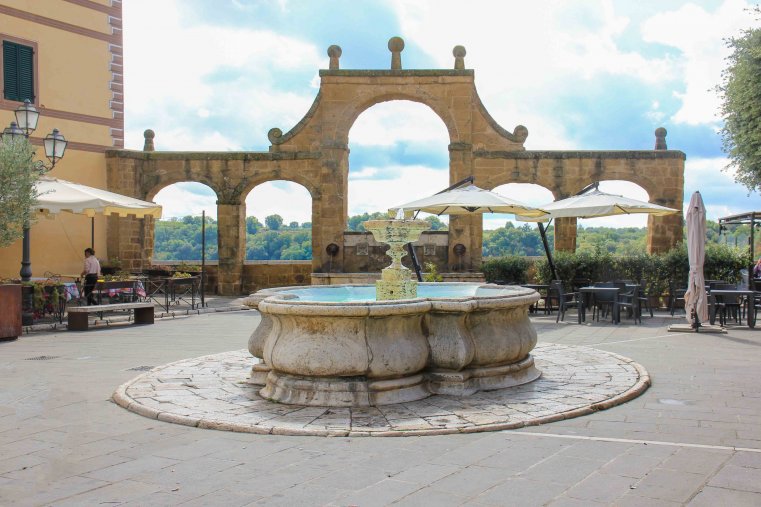 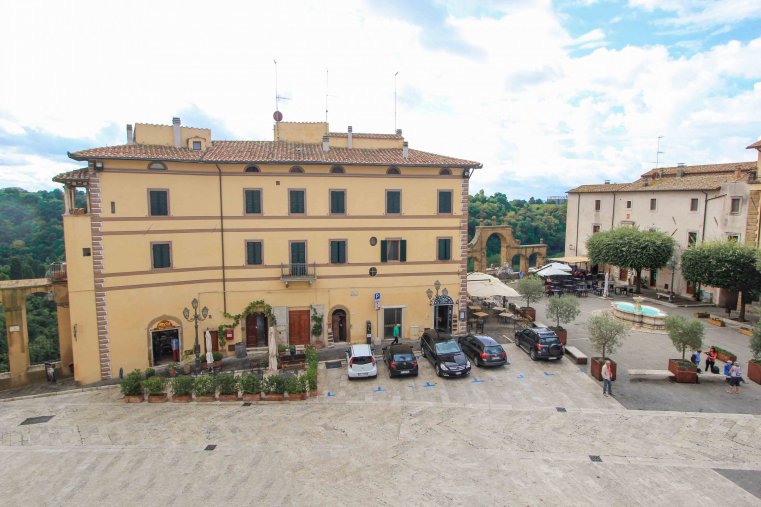 Palazzo Orsini is a former defensive complex built by the Aldobrandeschi family in the 12th century, which then became the property of Orsini in 1312. The latter transformed the castle complex and had the high walls joined together. Today Palazzo Orsini houses the Bishop’s see, the Museum of Religious Art and the Municipal Archaeological Museum. Paintings, sculptures as well as goldsmith art can be viewed in the 21 rooms. 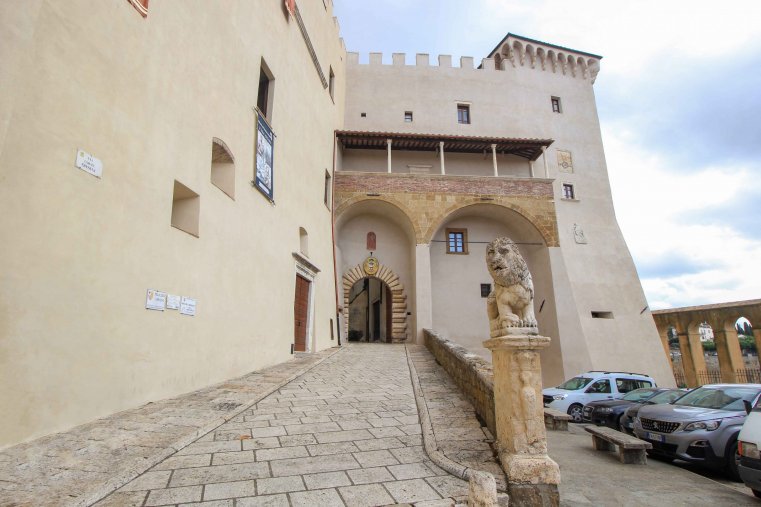 The car-free old town of Pitigliano is crossed by 3 alleys: The central Via Roma, Via Vignoli in the center and the southern Via Zuccarelli. A stroll through these alleys is the best way to let yourself go and discover a lot of interesting things. Picturesque are especially the ancient stone houses made of the red tuff stone of the region and the many plants and flowers that decorate the alleys. 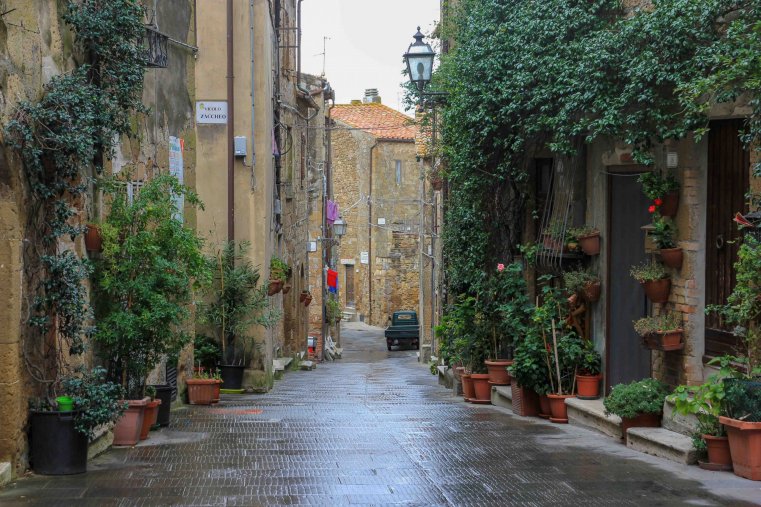 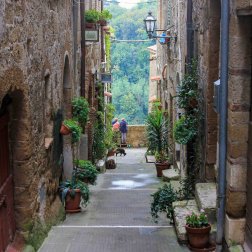 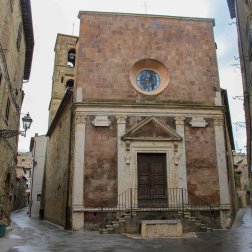 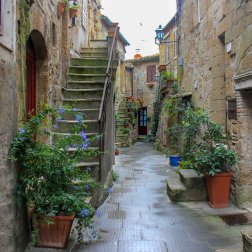 The most important attraction in Pitigliano is the Jewish quarter. In the 16th century, Jews who were expelled elsewhere found a second home thanks to the ruling Orsini family. The coexistence of Christians and Jews was so harmonious that Pitigliano was known as Little Jerusalem. However, after the Medici took over power in the 17th century, the Jewish quarter became a ghetto, including night curfews and persecution. Today, a tour of the museum allows visitors to see the beautiful synagogue, a bakery, the laundry and the wine cellar.

Tip: Some bakeries of the city sell Sfratto dei Goym. The name of this sweet pastry refers to the forced evictions of the Jews and is a popular Christmas pastry today. 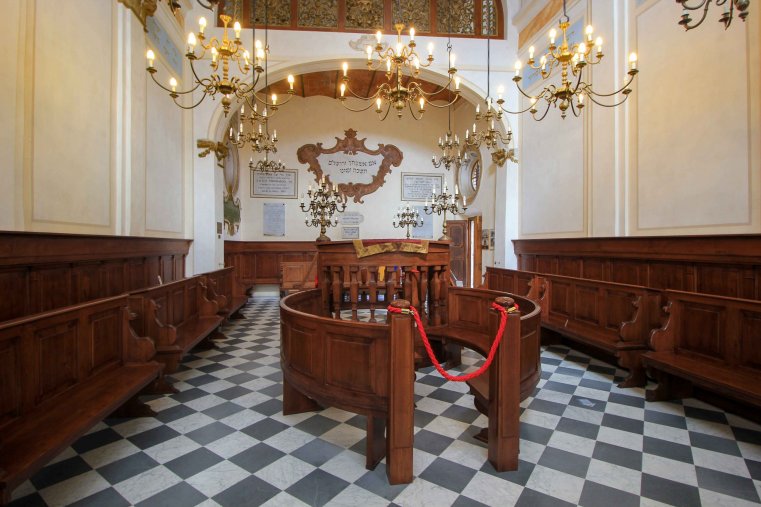 The history of the Cathedral “Santi Pietro e Paolo” goes back to the Middle Ages. Today it has a beautiful late baroque façade and is one of the most important monuments of Pitigliano. The church is also interesting from the inside, where art lovers can admire two works of Pietro Aldi. The Campanile was once a city tower in the Middle Ages and still rises over the beautiful old town. 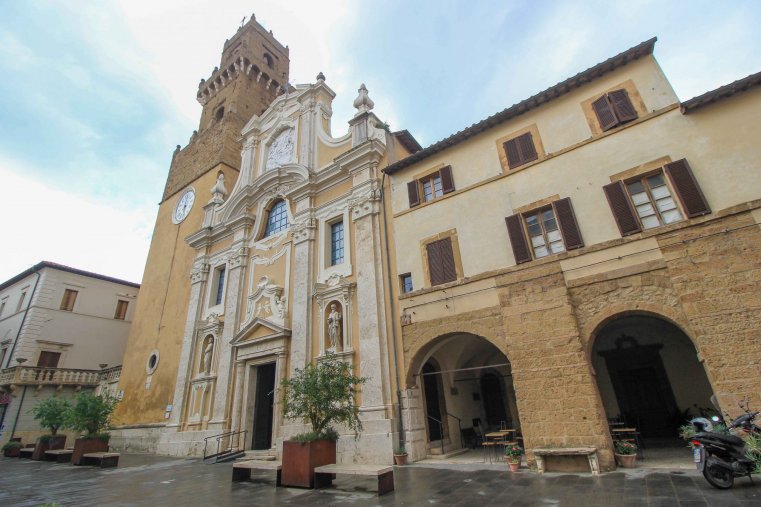 One of the most charming squares in Pitigliano is the picturesque Piazza S. Gregorio VII, which is located at the end of Via Roma and in front of the cathedral. Here you will be enchanted by an exceptionally beautiful flair, including cozy restaurants and small stores selling regional handicrafts and wild boar delicacies. 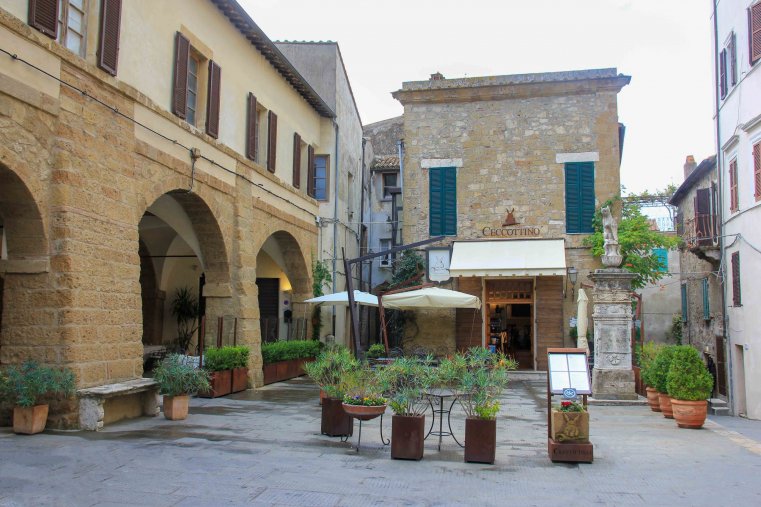 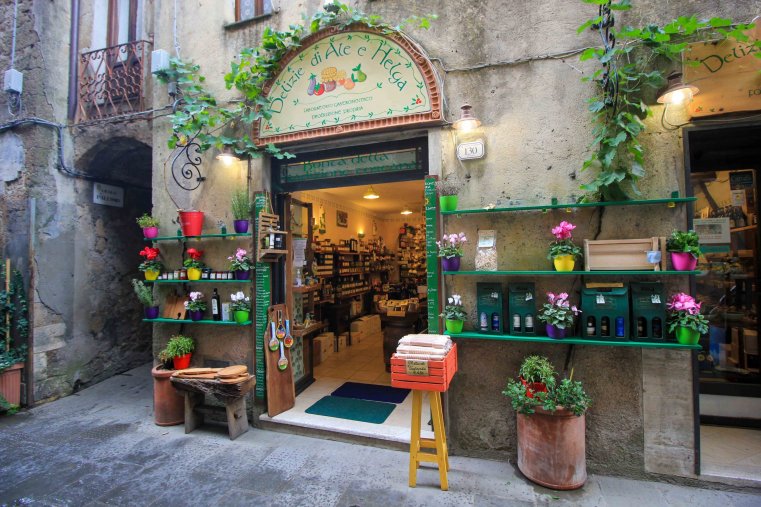 Around Pitigliano there are the so-called Vie Caves, which are a unique thing in this whole region. These are ancient hollows, dating back to the Etruscan period, which were carved into the rocks over 3,000 years ago. Some of these Vie Caves are up to 20 meters deep. The purpose of these historic roads is still unclear; they could be communication and supply routes or mystical places of worship. Today, countless hiking trails lead through these historical sites. 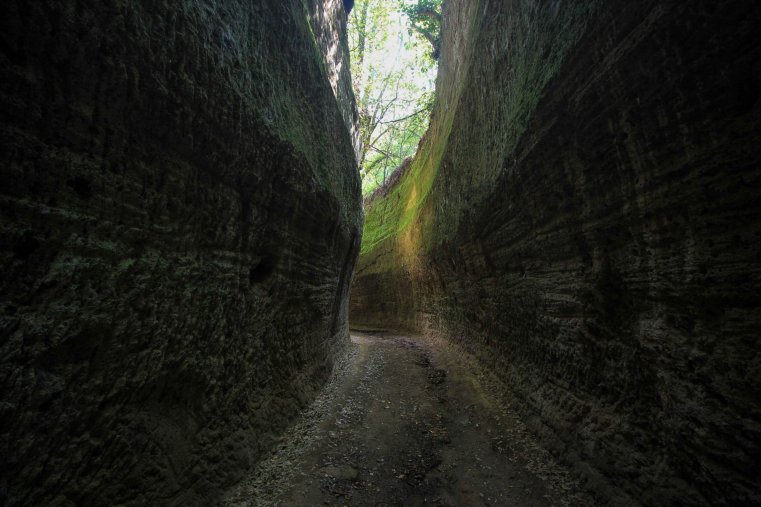 Things to Do near Pitigliano

When you travel to Pitigliano you can go on some really recommendable excursions to explore the surrounding area. Here are the best things to do in the region, summarized at a glance:

About 26 kilometers from Pitigliano are the famous sulfur springs of Saturnia. Here you can bathe in the middle of nature and enjoy the warm water of the turquoise sinter basins.

We also recommend a trip to Sovana, a lovely medieval village 7 kilometers away, which also has many Etruscan archeological sites.

Another interesting town is Sorano, about 9 kilometers away from Pitigliano, which enchants with a wild romantic old town. 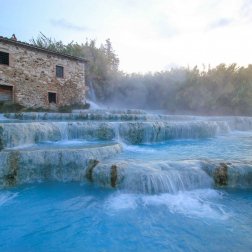 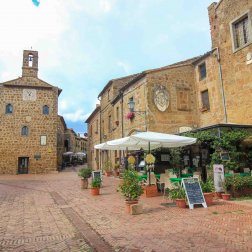 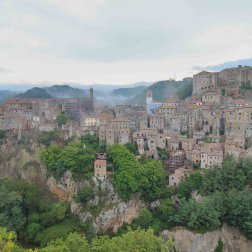 Pitigliano offers its visitors a small but fine range of fabulous accommodations. From well-kept wineries, agritourism with pool to vacation apartments, there is everything. Here are our recommendations for the most beautiful places to stay in Pitigliano…It’s worth a look!

Find the best accommodation in Pitigliano:


More places to visit in Tuscany: